It's no secret that two of the most popular federal programs for retirees aren't in great financial shape. Both Medicare and Social Security face significant challenges in the years ahead. But Medicare is in much more trouble than Social Security. Here's why.

When Medicare's trustees reported on the status of the federal healthcare program in 2015, they projected that the Medicare Part A hospital insurance trust fund would run out of money in 2030. Now the trustees estimate that the trust fund will be depleted in 2028 -- two years earlier than previously expected. 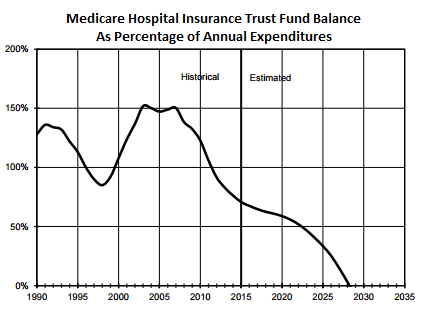 The depletion of reserves doesn't mean Medicare will quit paying for retirees' medical bills and Social Security will halt sending checks, however. Even when its trust fund runs out of money, Medicare could still cover 87% of benefits from ongoing funds, including taxes and premiums. Social Security would still be able to pay 79% of scheduled benefits when its trust fund is depleted in 2034. 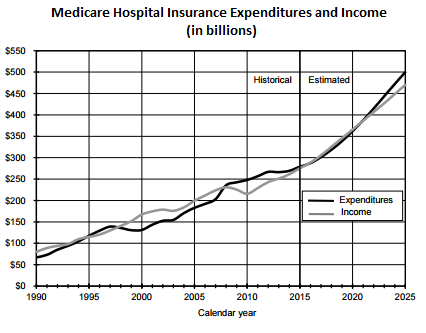 Note the steeper upward trajectory of Medicare hospital insurance expenditures beginning after this year. Increased spending in all areas is projected because of the aging U.S. population, with especially high percentage growth in skilled nursing, home health, and hospice costs.

These soaring costs don't include prescription drugs that are part of the Medicare Part D program. The latest projections are that Medicare Part D spending will more than double between 2016 and 2025.

Medicare's actual spending is very difficult to accurately predict because of the variables involved in projecting healthcare costs. However, it's clear that the program is headed in the wrong financial direction. What can be done to avoid a catastrophe?

One option is to increase the amount of revenue coming into Medicare. The most obvious way to do so is a tax increase. The primary source of Medicare Part A funding is the payroll tax. Employers and employees each pay 1.45% of employee wages currently, while self-employed individuals pay 2.9% of net earnings.

Additional revenue could be generated even without a tax increase, though. If more jobs were created, overall tax receipts would increase at current payroll tax rates. Higher-paying new jobs would help the most.

The other primary option is to reduce the rate of growth of Medicare spending. Some hope that efforts to implement value-based payment approaches instead of fee-for-service reimbursement will help accomplish this goal. Others think that implementing a premium support model, where the government provides payments to individuals to purchase health insurance from a private plan or through traditional Medicare, could be the best answer.

Regardless of what steps are ultimately taken, it's clear that something needs to be done. And, as the Medicare trustees said in their report, action needs to be taken "sooner rather than later to minimize the impact on beneficiaries, providers, and taxpayers."