Minimum wage laws have been a major political issue recently. Proponents of higher wages argue that they're necessary to provide for basic living expenses, and many have called for increases to as much as $15 per hour. Opponents, meanwhile, point to the potential impact of higher labor costs on the businesses that employ the most minimum wage workers. State legislatures have responded across the nation, and currently, 21 states are slated to put 2017 minimum wage increases into effect at some point during the coming year. Let's look at the list to see what stands out among these minimum-wage boosts.

Not all changes take effect on Jan. 1, and minimum wages can be higher in certain locations and/or for certain industries. Data source: CNN. Economic Policy Institute.

The first thing that you'll see from the list above is that not all minimum wage increases are very significant. Four states -- Alaska, Florida, Missouri, and Ohio -- are raising their minimum wages by just $0.05 per hour, while two more -- Montana and South Dakota -- are seeing just a $0.10-per-hour boost. New Jersey splits the difference with a $0.06-per-hour rise. These increases all have ties to changes in the rate of inflation, with most states choosing to link their minimum wages to rises in one of the Consumer Price Index data series. Most of the states that use these systems round the increase to the nearest nickel, but New Jersey stands out with precise wage rates to the penny.

On the other hand, some states are making truly massive increases to the minimum wage all at once. Arizona will see the biggest boost, with a rise of $1.95 per hour adding nearly 25% to the labor costs of minimum wage employers. Boosts of $1 or more per hour will also take place in Massachusetts and Washington state. 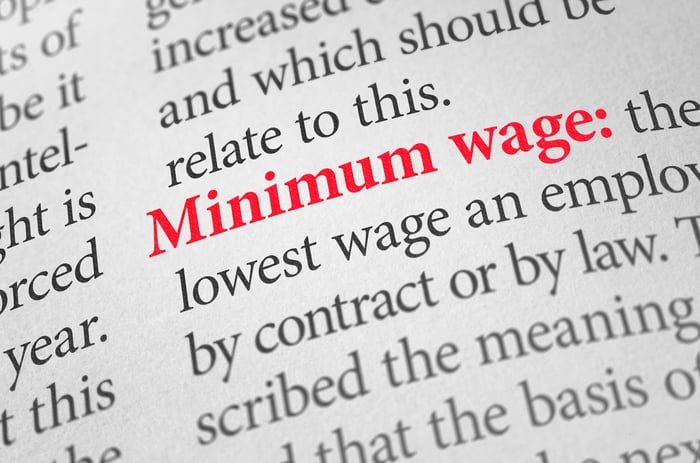 The trend will continue -- but not everywhere

Moreover, many states are in the process of multiyear increases to the minimum wage. Arizona's move is just the first in a series that will push the wage to $12 per hour by 2020. California has even more ambitious plans, with annual increases of $0.50 next year to be followed by $1 per hour raises in 2019, 2020, 2021, and 2022, bringing the state to the $15 mark. New York State's $0.70 per hour move is just the first in a series of five hikes that will lift minimum wages there to $12.50 per hour.

Even so, there are still a large number of holdouts among the states. Five states have no minimum wage laws at all, relying on the federal minimum wage to cover their workers. Another 15 states either have outdated minimum wage laws that are less than the current $7.25 per hour federal amount or match the federal law exactly. In those areas, it's likely to take federal legislation to move the needle for minimum wage workers. Although calls to raise the minimum wage at the federal level have gotten louder in recent years, labor activists have been much more successful in spurring local action in states where the political environment is friendlier to the cause.

For those who earn the minimum wage, any boost to pay can be a game changer, and those who live in the states listed above will celebrate the pay raises they get. Nevertheless, the debate over whether minimum wage increases are positive or negative for the economy as a whole is likely to continue not just in 2017 but for years to come.