Charitable giving is a huge part of American culture, and tens of millions of Americans give to charity regularly, donating an estimated $373 billion in 2015, according to the Giving USA 2016 report on philanthropy. But giving to charity can have financial benefits for you as well, because the IRS lets you deduct charitable contributions from your taxable income when you itemize deductions on your tax return.

When you add up cash donations, other forms of gifts, and in-kind donations of time and effort, charity gets a huge amount of support in the U.S., and the tax incentives deserve much of the credit. The average American taxpayer claiming a charitable deduction wrote off more than $5,800, which produced tax savings of as much as $2,300. 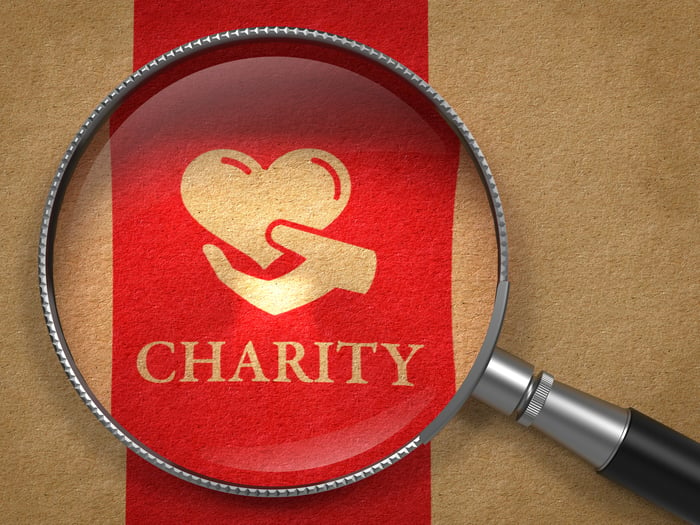 How giving to charity can help you save on taxes

Most people know they can write off their gifts to charity if they itemize their deductions. However, there are some restrictions on what counts as a charity in the IRS' eyes. In order to qualify, an organization must file the necessary paperwork and prove that it serves religious, educational, scientific, or literary purposes that are sufficient to earn tax-exempt status from the IRS.

In addition, you have to meet the timing requirements and income limitations in order to deduct the full amount of your gift on your tax return. Gifts made after Dec. 31 have to go in the current tax year, and for most charities, you can deduct gifts of up to 50% of your adjusted gross income on your tax return.

Given how many people make donations, it's not surprising to see a high number of taxpayers claiming those charitable contributions as deductions. More than 36 million Americans listed charitable gifts as itemized deductions during the most recent year for which IRS data was available, with the total claimed adding up to more than $210 billion. That works out to $5,814 as the average amount that taxpayers deducted from their tax returns for their charitable giving.

Looking at how people made their charitable gifts

Most Americans like to keep their charitable giving simple. More than 33 million taxpayers gave cash gifts or wrote donation checks totaling more than $155 billion. By contrast, only about 22 million made gifts of other items, such as clothing, vehicles, and investments.

Giving by cash or check is the easiest option for both the donor and the recipient. Your check can serve as your record to prove to the IRS that you made a gift, and charities can generally satisfy the reporting and documentation requirements easily when they get cash gifts.

By contrast, when you give by other means, there are some additional requirements you'll often have to follow. For instance, if you give away clothes or other items, then you have to come up with a reasonable valuation of those items in order to claim an appropriate deduction. Fair market value is the technically correct amount to deduct, but it takes some effort to figure out how much a pair of pants or an old shirt is really worth.

Moreover, large non-cash gifts can require much more onerous paperwork. Tangible gifts of $500 or more require an additional IRS form, raising a potential audit flag that makes it critically important that you document your gift. Gifts of more than $5,000 typically require formal appraisals, unless you give away investments whose value is established on a public exchange, such as shares of company stock.

What documentation should you collect?

To be safe, be sure you get the necessary documentation from the charity to which you make your donation. A written acknowledgement is required for gifts of $250 or more, and smaller gifts require at least some evidence on your behalf that they were actually made. Also, if you got a gift from the charity in return for your donation, the written acknowledgment should include information about that item as well. There are some exceptions for small items like mugs, but typically, you'll be able to deduct only the net gift after subtracting the value of what you got in return.

Even if charitable gifts weren't a tax break, Americans would give anyway. The U.S. is regularly ranked as one of the world's most generous countries in terms of charitable donations. However, getting some help from the IRS is icing on the cake for many who give to charity year in and year out.