Please ensure Javascript is enabled for purposes of website accessibility
Log In Help Join The Motley Fool
Free Article Join Over 1 Million Premium Members And Get More In-Depth Stock Guidance and Research
By Matthew Frankel, CFP® – Feb 9, 2017 at 9:27AM

Here are three of the biggest factors that could trigger an IRS tax audit.

For many Americans, "audit" is one of the scariest words in the English language. However, there are a couple of things you should know. First, few returns actually get audited -- about eight out of every 1000 are selected. And while some are selected at random, many tax returns are chosen for a reason. With that in mind, if any of these three things apply to you, your likelihood of an audit may be higher than average.

If you're self-employed, the chances of the IRS taking a closer look at your tax return increase significantly. In addition to people who work exclusively in their own business, this also includes taxpayers with some freelance income. Essentially, everyone who fills out a Schedule C is a greater audit risk. For example, in a recent tax year, if your Schedule C listed $100,000 or more in gross receipts, you had an audit risk of 3.6% -- about four times the rate of people who work for an employer. 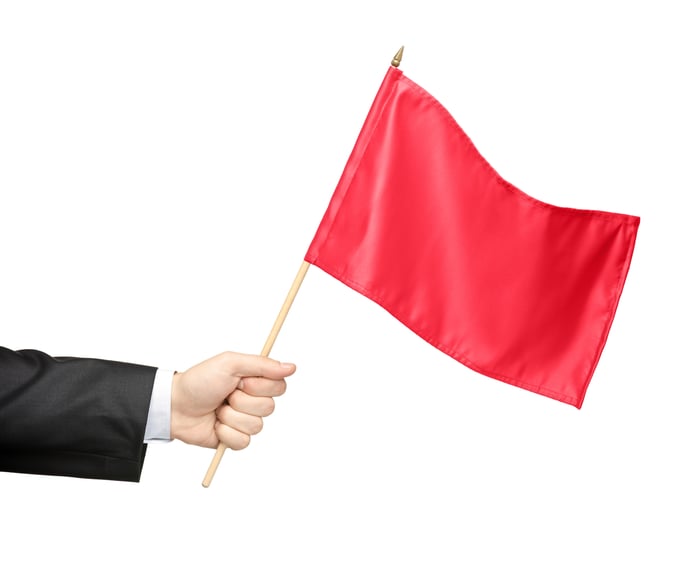 The reason for this is simply that there is a lot more room for abuse if you're self-employed. If you're paid by an employer, you receive your paycheck and taxes are withheld. On the other hand, self-employed individuals have many deductions available to them, and many of these are easy to exaggerate. For example, deducting business meals and expenses can set off bells at the IRS, especially if they aren't typical for your line of work.

Claiming 100% business use of a vehicle is another small business audit trigger, as is the home office deduction. Both of these are claimed by many people who aren't actually entitled to them. Few vehicles are used for business 100% of the time, and home offices have to meet a rather specific IRS definition. There are other often-abused self-employed deductions, and this is the reason the IRS likes to take a closer look at many returns with a Schedule C.

The IRS does a great job of compiling data on the tax returns it processes. Because of this, the IRS knows what they average taxpayer with your income donates to charity, pays in mortgage interest, and claims for many other deductions.

Therefore, if any of your deductions looks exceptionally high, the IRS might want to take a closer look. For example, the average taxpayer in the $50,000-$100,000 adjusted gross income (AGI) range who itemizes claims a $3,147 charitable deduction. So, if you earned $75,000 last year and claim donations of $3,500, it's unlikely to set of any alarms at the IRS. On the other hand, if you earned $75,000 and claimed $20,000 in donations, there's a strong possibility that the IRS will want to verify your claim.

The same goes for other deductions as well. Another good example is the deduction for unreimbursed moving expenses if your move was related to the start of a new job. If you earn $60,000 per year, the IRS might wonder if you really spent $15,000 to move to your new home (average is $2,980), or if you fudged the numbers a little. Here's a guide to more of the average deductions, so you can see how yours stack up.

Perhaps the biggest single factor that influences your audit risk, aside from doing something blatantly wrong like claiming dependents who don't exist, is your income.

I mentioned in the introduction that just 0.8% of all tax returns get audited. Well, if you're in one of the middle income brackets, the audit rate is as low as 0.47%. However, if your reported income is extremely high or low, your audit risk could be many times higher. For example, if your AGI is between $200,000 and $500,000, your chance of an audit jumps to 1.54%. Earn over $1,000,000? Your audit risk is over 8%. The highest earners in the U.S., those with AGI over $10 million, get audited nearly 35% of the time. On the other end of the spectrum, tax returns with no reported income are audited 3.78% of the time, about 4.5 times the overall average.

The reason? The IRS has limited resources to enforce the tax code, and this has been especially true in the last few years. Therefore, like any efficient business, the enforcement agents spend their time where the most potential for revenue lies.

Think of it this way -- if you're an IRS agent and you audit the tax return of a married couple who earns $75,000, you might find some errors that result in a few hundred dollars of additional tax revenue. If you audit someone who earns $5 million per year, any significant errors or miscalculations could bring in thousands and thousands of dollars in additional tax revenue.

Again, just because one of these "red flags" applies to you doesn't imply that you've done anything wrong, or that you should fear an audit. If you gave a lot to charity last year, you should certainly claim every penny of it. If you're self-employed, you should absolutely take advantage of every deduction to which you're entitled. And if you have a high audit risk because you make a lot of money, well, I'm sure there are a lot of low-risk individuals with moderate incomes who would love to trade places with you.

The point is that while everyone should keep proper tax documentation, it's doubly important to be thorough if you're a high audit risk. Just be prepared to back up every single deduction, credit, and income source you claim on your tax return, and you shouldn't have anything to worry about.