Please ensure Javascript is enabled for purposes of website accessibility
Log In Help Join The Motley Fool
Free Article Join Over 1 Million Premium Members And Get More In-Depth Stock Guidance and Research
By Sean Williams - Updated May 30, 2018 at 4:15PM

Today's maximum capital gains tax rates are considerably lower than they were decades ago.

Don't look now, America, but it's time to don your thinking cap, grab your W-2s, and collect those 1099 forms, because it's tax season! Between the beginning of this year and April 15, more than 150 million individual taxpayers are expected to file their 2016 income taxes, or at worst file for a six-month extension.

For most Americans, tax time usually means a fat refund. Internal Revenue Service data from 2014 shows that 109.5 million of the nearly 150 million returns processed by the IRS resulted in federal refunds, averaging $2,792.

But tax time can also be bittersweet for a separate group of taxpayers (usually those found in the upper- and middle-income tiers), because it could very well mean handing over a percentage of the profits you've earned while disposing of an investment or property to the federal government. 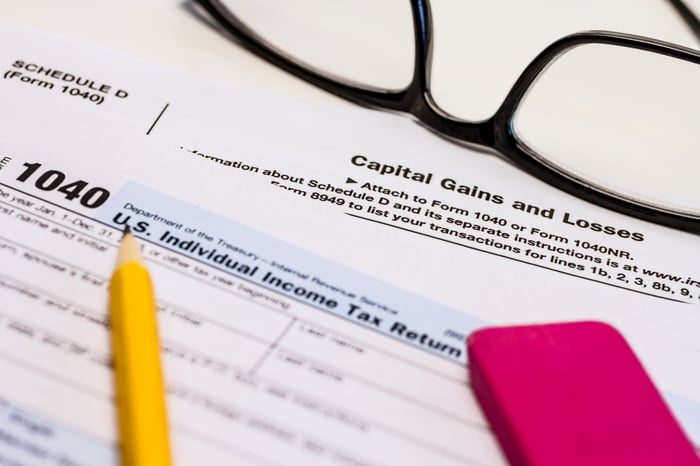 The IRS typically splits individuals claiming a capital gain into two groups: those with short-term gains and those with long-term gains. A short-term capital gain is defined as any investment held for 365 days or less. Any profits recognized from short-term gains are taxed as ordinary income. Therefore, if your peak ordinary income tax bracket is 28%, and you recognized a $3,000 gain from selling stock in 2016, you'd owe 28% on your $3,000 gain, or $840.

A long-term capital gain constitutes an asset that's been held for at least 366 days. The advantage of holding your assets for at least a year and a day is that your tax liability drops from mirroring the seven ordinary income tax brackets (min 10%/max 39.6%), to just three brackets:

This considerably lower capital gains tax rate of 20% for the wealthiest Americans, and 15% for middle-class individuals and families, has played a pivotal role in allowing for real wealth creation. If investors are able to hang onto more of their investment gains, they should presumably be able to build their nest eggs faster.

Taxpayers should really be thankful

As you can see, with the exception of pre-1941 and 2004-2012, maximum capital gains tax rates have regularly been 20% or higher. You'll note that between 1970 and 1979, wealthy taxpayers were forced to part ways with between 30.2% and 35% of their capital gains. The current rate of 20% is actually low compared to where things have been since 1941, and investors should be thankful for it.

Trump could shake things up

The big question going forward is whether or not President Trump will consider adjusting capital gains tax rates when he and the Republican-led Congress tackle tax reform in the months and years that lie ahead.

Last year, Trump introduced tax reforms that had one main goal: simplification. With regard to corporate income taxes, Trump proposed lowering peak rates from 35% to 15%, as well as creating a repatriation holiday rate of 10% to coax overseas capital back into the United States. For individuals, Trump adopted the House Republican plan that would cut the current seven brackets to just three (12%, 25%, and 33%), while boosting the standard deduction and eliminating all but a handful of deductions and credits. 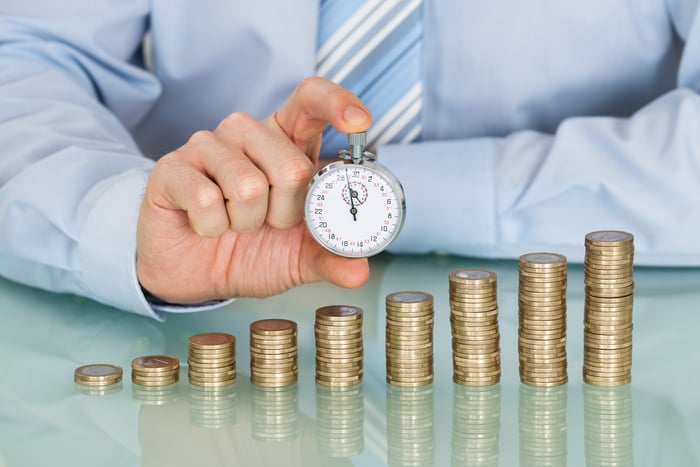 What Trump's plan doesn't discuss is capital gains tax rates. Lowering capital gains tax rates could encourage more Americans to invest, which would almost certainly be a good thing with the stock market returning an average of 7% per year over the long-term including dividend reinvestment. The stock market could arguably be the best wealth creator the American public has at its disposal.

On the other hand, lowering the capital gains tax rate may wind up putting even more money into the pocket of wealthier Americans, who are the most likely to invest and pay capital gains tax. As with most issues, it's a two-sided coin that comes with its own set of advantages and disadvantages.

But regardless of what happens with capital gains tax rate, take solace in the fact that today's maximum rates are among the lowest they've been since World War II.