Please ensure Javascript is enabled for purposes of website accessibility
Log In Help Join The Motley Fool
Free Article Join Over 1 Million Premium Members And Get More In-Depth Stock Guidance and Research
By Matthew Frankel, CFP® - Mar 12, 2017 at 6:17AM

How do your deductions compare, and why does it matter?

We're a few months into tax season, and many people have already filed their returns, while others are still gathering documentation. As you go through the process, you may be wondering how much the average American's tax deductions are and how you compare. Here are the average amounts of Americans' most common deductions, and why it's important for you as a taxpayer to know this information.

There are many items that are potentially deductible on your tax return, from unreimbursed business expenses to car taxes you pay each year, but the largest deductions used by most Americans are in these four categories: 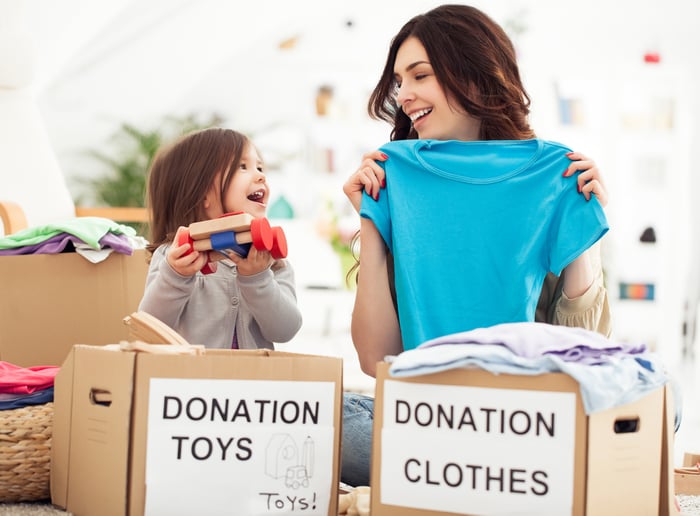 Charitable contributions are among the most common tax deductions. Image source: Getty Images.

Each year, the IRS releases a breakdown of data from the tax returns it processes. Recently, the agency released its preliminary data for the 2015 tax year -- that is, the tax returns filed and processed in 2016. So, here's the latest picture of how large the average American taxpayer's deductions are.

It's important to note that only about 30% of taxpayers choose to itemize deductions on their tax returns, with the rest opting for the standard deduction instead.

Why it matters to you

One big reason this information is important is because the IRS uses the averages to decide who gets audited. Some audits are indeed random, but many are triggered by a certain piece of data that sets off red flags. Having a deduction that is much larger than average certainly qualifies.

For example, according to the chart, the average American with AGI of $80,000 can be expected to take a $3,244 charitable deduction. So, if you deduct $3,500 worth of contributions, it may not set off any alarms at the IRS. On the other hand, if you claim a $10,000 deduction, it could prompt a second look.

It's also important to note that some deductions are uncommon in any amount, which could also set off bells at the IRS. The medical expenses deduction is a good example of this -- since it only applies to expenses greater than 10% of a taxpayer's AGI, a relatively low number of taxpayers qualify for this one, especially in the higher income brackets.

Now, you should claim every penny you're entitled to -- just be aware that the chance of an audit increases if your deductions are far from the norm, and if they are, it becomes doubly important to be sure you can adequately document every deduction you take.