You never know when you might encounter a complicated tax situation, and while you can sometimes go it alone, in certain cases, you'd be much better off enlisting the help of a personal tax attorney. Because taxation law is extremely complex, a lawyer could spell the difference between a successful IRS battle and one that ends poorly for you. Furthermore, if you're facing income tax evasion charges, you should absolutely hire a tax lawyer to act in your defense.

Although less than 1% of tax returns get audited each year, sometime, all it takes is a bit of missing or mismatched information to wind up on the IRS's list. While most IRS audits are conducted by mail, in some cases, you may need to engage in a face-to-face battle of sorts with an actual IRS agent. And while he or she may not look scary, you can bet that agent will know a whole lot more about the tax code than you do.

If you're facing an in-depth, in-person audit, having a tax attorney in your corner could produce a much better outcome for you. First of all, your lawyer will be able to address any questions that IRS agent throws your way and answer them in the least harmful manner possible. In addition, if you're found to owe a significant amount of money, your tax lawyer will be able to negotiate with the IRS on your behalf.

According to IRS estimates, up to 17% of taxpayers fail to fully adhere to the law when filing their returns. But there's a difference between forgetting to report a small amount of side income and actively hiding large chunks of income, and if the IRS thinks you've done the latter, you could face criminal charges. 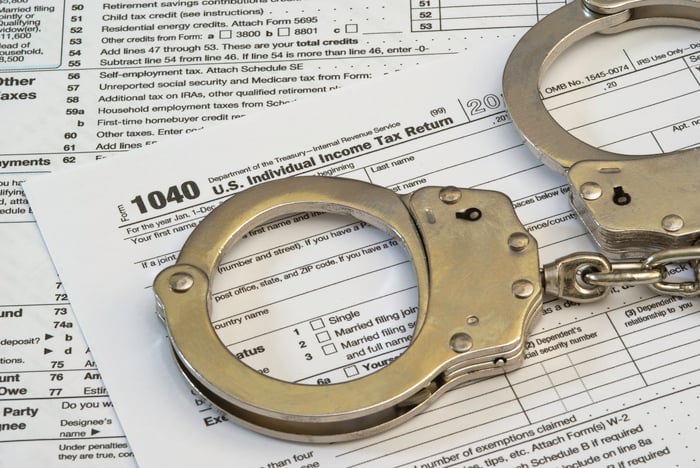 Anytime you're accused of tax evasion or tax fraud, you shouldn't think twice before hiring an attorney -- because if you are indeed convicted, the penalties can be downright catastrophic. For one thing, you could go to jail if you're found to have willingly evaded income taxes. But even if that never comes to be, if you're found guilty of tax fraud, you could face a 75% civil penalty on the amount of tax you underpaid on top of the actual taxes you owe. And if you are convicted of a tax crime, your attorney can work to help get your penalty (or, in some cases, jail time) reduced.

If you're facing an IRS audit and you're willing to spend the time reading up on tax laws, then you may be able to handle the situation on your own and save yourself the attorney fees. But if you're facing any type of criminal charges, you'll be taking a huge risk by fighting back solo.

Though tax lawyers can be expensive, in many cases, they're able to more than make up for their fees. That said, if you're going to enlist the help of an attorney, make sure you understand how you'll be charged. Some lawyers charge a flat fee for tax matters, while others charge an hourly rate. The benefit of paying a flat fee is that there won't be any surprises down the line, but if your situation is relatively uncomplicated, you may come out ahead by paying an hourly rate.

Finally, if you're looking for a tax lawyer, it never hurts to shop around. Just make sure to choose someone with the right experience and credentials. When you're deep in the throes of an IRS battle, you really can't afford to be stingy.