Please ensure Javascript is enabled for purposes of website accessibility
Log In Help Join The Motley Fool
Free Article Join Over 1 Million Premium Members And Get More In-Depth Stock Guidance and Research
By Matthew Frankel, CFP® - Jun 25, 2017 at 10:22AM

Student-loan debt in the U.S. is now $1.31 trillion -- more than auto loans or credit cards.

As of the fourth quarter of 2016, Americans owed a total of $1.31 trillion in student-loan debt -- more than for auto loans ($1.16 trillion) or credit card debt ($779 billion). Since there are approximately 126 million households in the United States, this translates to an average of $10,397 in student-loan debt per household.

However, this doesn't tell the whole story, since fewer than 19% of households owe any money on student loans at all. The roughly 23.2 million households with student loans have an average outstanding debt of $49,905. 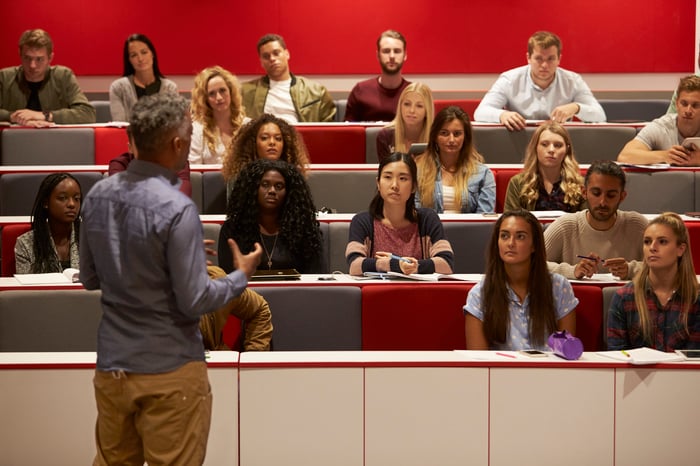 The four major types of debt, in order from greatest total amount to least, are mortgages, student loans, auto loans, and credit cards. Here's a rundown of how much the average American owes on each type of debt, and how many households have each type.

In addition, Americans' outstanding student-loan debt is heavily weighted toward recent graduates, who have had to borrow more to keep up with rising tuition costs. According to the website Student Loan Hero, the average Class of 2016 graduate has $37,172 in student-loan debt, over $10,000 more than the average borrower.

Student-loan debt has ballooned in recent years, but is slowing down

It's no secret that student-loan debt has skyrocketed in recent years. In fact, the total has grown by 186% over the past decade alone.

However, it looks like the growth of student-loan debt may be finally starting to slow down. Although it grew by 6.3% in the most recent one-year period for which complete data is available, this is actually the slowest growth rate since NerdWallet began tracking student-loan debt in 2003. To put this into perspective, consider that from 2003 to 2010, U.S. student-loan debt grew at an average rate of 17.9% per year.

Is America's student-loan debt really worse than its credit card or auto-loan debt?

To be fair, comparing student loans to auto loans and credit cards isn't exactly an apples-to-apples comparison. In all honesty, I think Americans' $779 billion in credit card debt is somewhat worse than their $1.31 trillion in student loans.

In addition, there are programs in place to make it easier for student-loan borrowers to pay their debt that simply don't exist with other forms of debt. Repayment options such as the Pay As You Earn program keep payments affordable for working graduates, and forgive any remaining balance after a certain amount of time. Last I checked, my mortgage and credit card lenders didn't offer similar programs (although that would certainly be nice).

To be clear, I'm not saying that American student-loan debt isn't too high, or isn't getting worrisome. I think ballooning student-debt levels are a problem that needs to be solved. Rather, I'm saying that when you read headlines like "Student debt is nearly twice the size of credit card debt," take them with a grain of salt. Credit card debt, especially, is a much more dangerous form of debt for most Americans to carry.

Will the student-debt "bubble" continue to grow?

Unless there's a serious change in the magnitude of available student-loan forgiveness programs, it's almost certain that student-loan debt will continue to grow. Inflation is a natural economic process, so college costs should rise over time, just not at the rates we've seen over the past few decades. And higher college costs will naturally translate into larger student loans.

The better question is: Will student debt grow at a healthy and sustainable pace, or will it balloon out of control and create a nationwide student-debt crisis, as many experts fear?