It's not unusual for savings to fall by the wayside among low- to middle-income U.S. households. After all, when you're barely earning enough to cover the bills, setting money aside for other goals can be a challenge, to say the least. Wealthier folks (which, for the purpose of this discussion, are defined as those having $500,000 or more in investable assets), on the other hand, have a much greater opportunity to save -- but that doesn't necessarily mean they're doing so wisely.

In fact, 70% of wealthy millennial families are putting college savings ahead of retirement. That's the latest from a study by Personal Capital, which also found that almost half of affluent young families are open with their children about their net worth, and, as such, have opened the door to certain expectations. For example, 64% of wealthy millennials with children say their kids expect them to pay for college. 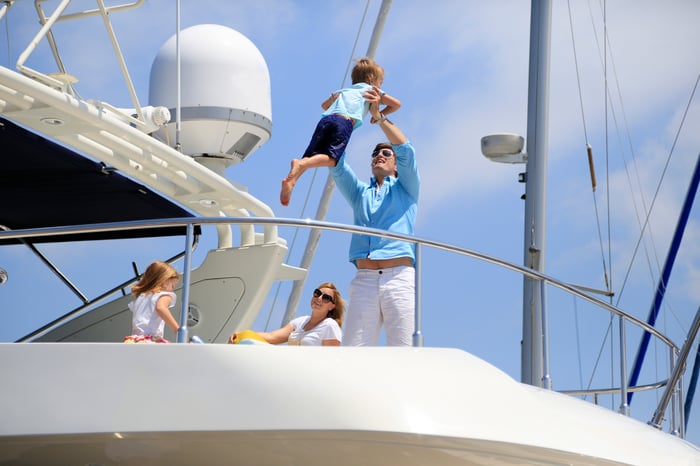 Of course, given the cost of college these days, it almost seems like you'd need to be wealthy to cover those ever-climbing tuition bills. And saving for college is unquestionably a respectable goal.

That said, no matter your net worth, you should never put college savings ahead of retirement, and the reason is simple: Your kids can always borrow money for college, but you can't finance away your retirement. If you leave your career behind without ample savings to support the lifestyle you want, you're going to either start running out of money, or find yourself with no choice but to make compromises later in life. And neither, frankly, is ideal.

Of course, it's not just the wealthy who seem to be focusing on college more than their golden years. In a recent Gallup study that covered households with a wide range of income levels, most families listed paying for college as their primary financial concern.

One of the most daunting prospects of paying for college is the limited window most families are given to do so. Unless you start saving before you have kids (which most folks aren't doing), you only get a roughly 18- to 22-year time frame to accumulate enough savings to cover your costs. And when you have multiple children to put through college, the pressure mounts even more.

But while retirement does offer a far more expansive savings window (if you start in your 20s and retire in your 60s, you'll have a good 40 to 45 years to amass a nest egg), it's also far more expensive than college. In addition to housing, transportation, food, utilities, clothing, and other such necessities, seniors face two major expenses that can surpass the cost of college and then some: healthcare, and long-term care.

According to recent projections, the average healthy 65-year-old couple today will spend $400,000 or more on healthcare alone in retirement. Meanwhile, most seniors end up needing long-term care, and that can run the gamut from over $43,000 a year for an assisted living facility to roughly $82,000 a year for a shared room in a nursing home. If you end up requiring the latter for 10 years, that's $820,000 your savings will need to cover, unless you happen to have long-term care insurance. Even with a policy, you'll still be liable for a chunk of those costs, which well exceed the price of college tuition at even the most elite institutions.

And there lies the danger of putting college ahead of retirement. While you might help your child avoid student debt or give him or her a leg up going into adulthood, unless you're staying on track for retirement, you'll be putting your own future at risk.

A more balanced approach to saving

Regardless of your income level, it pays to save for both retirement and college simultaneously. And if you start early enough, you can pull both feats off.

Imagine you're earning $100,000 a year, and have your first child at age 30 and your second three years later. If you set aside 20% of your earnings starting at 30, and allocate 10% to retirement and 10% to college for the next 25 years, at the end of that window (at which point your children would conceivably be done with their undergrad studies), you'll have $632,000 to apply to each goal, assuming your investments bring in an average yearly 7% return during that period. And that's more than enough to put two children through college.

If you then, beginning at age 55, start putting $20,000 a year into your retirement account, by age 67, you'll have $1.78 million, assuming that same return on investment. And that's certainly a respectable number to have on hand for retirement.

Of course, depending on your income level and savings ability, your ultimate balance might look quite different. But the point is that it is possible to save for both college and retirement at the same time, and be successful at both. And if you can't pull that off, set aside enough money for retirement so that you know you're on track to meet your goals, and put whatever excess cash you acquire into a college savings account. Funding your kids' education is a noble endeavor, but if you skimp on retirement savings in the process, you'll come to regret it as a senior -- no matter how wealthy you might be.