The bull market in stocks turned 9 years old last Friday. The Dow Jones Industrials (DJINDICES:^DJI) closed at 25,336, or just less than quadruple where the Dow had closed nine years before, at 6,547 on March 9, 2009.

After such a long period of outperformance, it's hard to remember just how much panic there was about the stock market back then. Some of the nation's largest banks were on the verge of collapse, and many feared that massive bailouts from the federal government would prove insufficient to rescue the global economy from a second Great Depression. 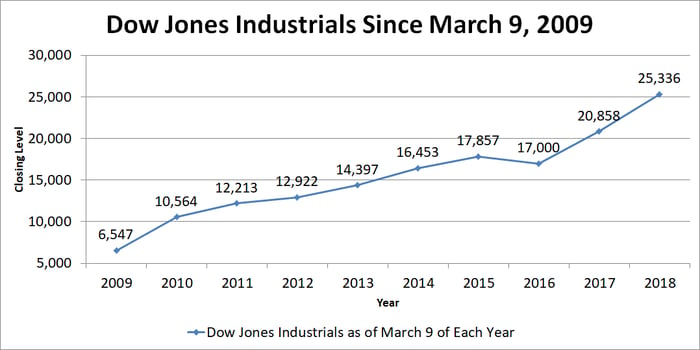 There weren't many brave souls back then willing to make large bets on a comeback from the stock market. Yet there were plenty of people who continued to make their regular contributions to 401(k) plans, mutual funds, and brokerage accounts, taking advantage of low prices to make their investing dollars go further. As things turned out, their persistence was rewarded.

Don't quit on the market

The other observation from this graph is that it's impossible to know how long a bull market will last. After jumping more than 50% between early 2009 and early 2010, many predicted that the Dow would have to give back some of those gains before continuing higher. Yet the index climbed upwards, continually defying those who repeatedly said a bear market was inevitable. Those who sold early missed out on big gains later.

The bull market will indeed end someday. But it's better not to focus on trying to guess when and instead make regular investing a habit. Over the long haul, investors in the market have come out well ahead even while enduring the inevitable downturns along the way.