Please ensure Javascript is enabled for purposes of website accessibility
Log In Help Join The Motley Fool
Free Article Join Over 1 Million Premium Members And Get More In-Depth Stock Guidance and Research
By Michael Douglass – Apr 1, 2018 at 9:46AM

How does free money sound?

The massive tax reform passed by Congress and signed into law by President Trump last December could make a big difference in your finances. I'm not talking about the direct tax breaks for individuals (frankly, they don't amount to much), but rather the huge reduction in corporate taxes.

As a result of tax reform, almost half (49%) of midsize-and-up employers are considering boosting employee benefits, according to a Willis Towers Watson survey. In fact, 26% are pondering (or have already implemented) a boost in their 401(k) match. It's essentially a raise -- and one that's hidden, because you'll only see it materialize in a better-funded retirement account.

Given how badly behind most Americans are when it comes to retirement saving, that would be a welcome change. 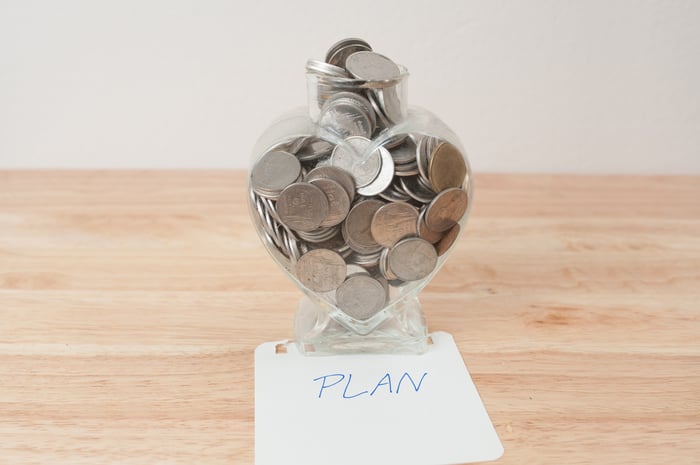 The 401(k) was originally developed as a supplement to traditional defined-contribution (pension) plans, but company cost-cutting over the years means that the 401(k) has become one of the primary ways Americans save for retirement.

Given that companies slashed the pension system to bits and have just gotten a tax break worth billions and billions from the federal government, the least they can do is pass a little on to us workers. The typical 401(k) matching program works like this: You put in 6% of your salary, and the company will give you a match -- most commonly 3%.

Even a one-percentage-point boost in that match could make a big difference -- in fact, it could be worth over $54,000 in extra savings for you at retirement.

To demonstrate that, let's pretend that you make the Census-identified median household income of $57,617 in 2016-adjusted dollars. Let's also assume that you contribute the full 6% to get the full match. (Side-bar: Make sure you do that. In 2015, Americans lost out on $24 billion in matching funds by failing to maximize their match. That's an average of $1,336 per worker who failed to match. It's free money you get by choosing to save.) Let's imagine that your company ups the match by one percentage point -- so things increase from 3% to 4%. Assuming you contribute the same amount every year for 30 years at a 7% annual return (within the stock market's historical averages), that extra one percentage point is worth $54,425 in extra savings.

Talk about a payday.

Now's the time to advocate

If your company hasn't communicated with you about any planned largesse as a result of tax reform, now might be a good time to bring it up with whoever manages your company benefits (usually HR). I don't have any brilliant hacks for how you can magically convince the benefits people to give you the raise, unfortunately, but I have a few rules-of-thumb that can make that conversation a little easier.

The other way to make that math work

Your financial future isn't wholly dependent on your company's largesse. The math I worked above showed how much extra money you could get over 30 years of saving and investing if your company boosted your 401(k) employer match by a single percentage point. You can achieve the same gain in retirement savings by boosting your 401(k) contribution from, say, 6% to 7%. That means you're paying an extra $17,285 total (that is, $576 per year, or $24 per twice-monthly paycheck) in exchange for an extra $54,425 at retirement. The power of compounding at work.

Plus, you get a tax break. Assuming it's within your budget, that's a good trade if I ever saw one.