For example, did you know that the majority of estate taxes collected result from unpaid capital gains on investments?

The federal estate tax has been a major political issue for some time but isn't well understood by many Americans. With that in mind, here's a rundown of who the estate tax applies to, legal ways wealthy families reduce or even eliminate their estate tax liability, and a few other things you might not have known.

The estate tax only applies to very rich families

Even before the Tax Cuts and Jobs Act passed, the estate tax only applied to a small percentage of American families. 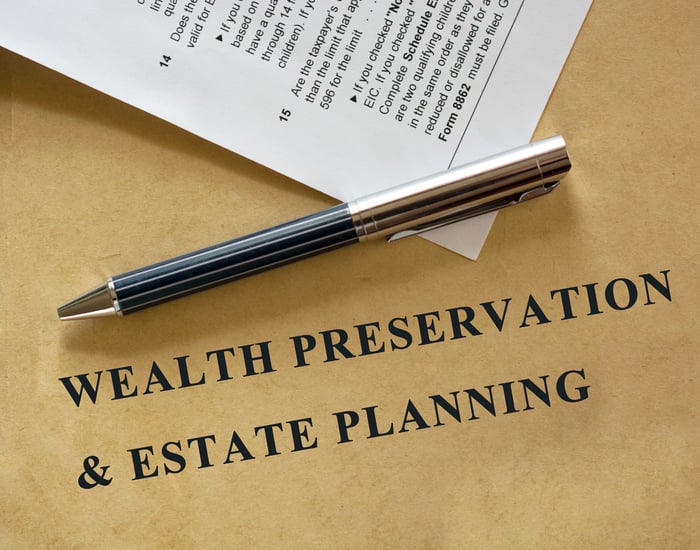 Now, it's even fewer. For 2018, the estate tax basic exclusion amount has been doubled to $11,180,000. This means that Americans can exclude this amount of assets from their taxable estate. In other words, if you die and leave $15,000,000 worth of investments and other assets to your heirs and haven't given any taxable gifts, only $3,820,000 of this will be subject to estate tax.

What's more, this exclusion amount is per person. Married couples get an exclusion for each spouse, so a couple can leave as much as $22,360,000 to their heirs, and the IRS can't collect a penny of estate tax.

Under the former estate tax structure, the Joint Committee on Taxation estimates that only 0.2% of estates owed any estate tax at all. Now that the exclusion has been doubled, this will likely decline even further.

In addition to the lifetime exclusion amount mentioned in the previous section, there are a few other completely legal ways to reduce the size of your estate, and therefore lower your estate tax burden.

For starters, there's an annual exclusion for gifts, which for 2018 is $15,000. This means that you can give as much as $15,000 per person to as many people as you'd like, and this money will not be included in your taxable estate. Spouses can collectively give as much as $30,000 per person. Over a period of several years, this can dramatically reduce the size of a wealthy family's taxable estate.

In addition, there are certain types of trusts that can be used to reduce an estate's eventual size, such as a grantor retained annuity trust, or GRAT.

As my colleague Dan Caplinger wrote last year, there are technically 12 different estate tax brackets. I say "technically" because the only one that actually applies to taxable estates in practice is the highest bracket, which calls for a 40% estate tax rate.

However, keep in mind that there is a big lifetime exclusion allowance, an annual gift tax allowance, and several other techniques wealthy families can use to lower their estate taxes. For many families that end up owing estate taxes, the effective rate they pay is much less than 40%.

Unrealized capital gains are a big part of the estate tax

Warren Buffett's Berkshire Hathaway stock is worth more than $80 billion as I write this, and he acquired it for less than 0.01% of this amount. Yet, Buffett hasn't paid a dime of tax on this profit.

He's not alone. This is known as an unrealized capital gain -- the IRS doesn't tax profits you make on investments until you sell them and actually get, or "realize", the gain.

Because so many wealthy people have a substantial portion of their wealth in investments, it shouldn't be a huge surprise that unrealized capital gains make up a huge portion of the estate tax that is collected. In fact, the Federal Reserve has said that 55% the taxes collected on estates worth more than $100 million come from unrealized capital gains -- more than from any other type of asset combined.

Many states have their own estate tax

As a final thought, in addition to the federal estate tax, some states have their own estate and/or inheritance taxes. There are 12 states plus D.C. that have some form of these taxes (Note: There were 14, but two -- Delaware and New Jersey -- recently eliminated theirs.)

And don't think that just because you don't have a large enough estate to get hit with the federal estate tax that you'll avoid your state's version. Some use the same threshold as the IRS, but most don't. In Washington, D.C., for example, the estate tax exclusion is just $1 million.

Working in Retirement? Here's Why That's Great -- and Why It's Really Not
395%