Find out why prescription drug coverage could get more affordable next year.

Tens of millions of older Americans count on Medicare to help them with their healthcare expenses after they retire and lose insurance coverage from their employers. As with most healthcare costs, Medicare participants have gotten used to the idea that over time, they'll likely see what they pay for premiums go up.

Yet recently, the Centers for Medicare & Medicaid Services (CMS) have announced that average basic premiums for prescription drug coverage under Medicare Part D are projected to go down in 2019 from current levels. That will mark the second straight year of declines, which is highly unexpected given the general trend toward higher premiums throughout most of the healthcare space. 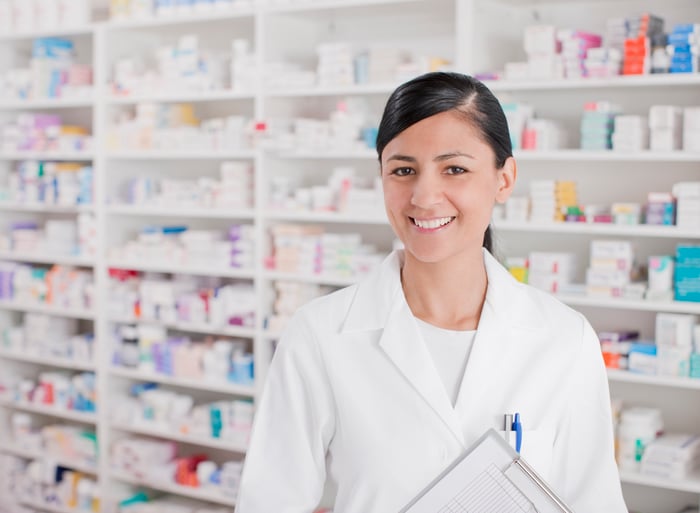 According to CMS, basic Part D premiums are expected to decline by about 3% from 2018 levels. New monthly premiums of $32.50 will be about $1 less than the $33.59 per month in premiums that the typical Medicare participant pays this year.

Other figures related to Medicare's prescription drug coverage operations showed similar decreases. The national average monthly bid amount, which reflects the average of standardized bids submitted by all prescription drug plan providers weighted by the number of participants each plan has, is projected to fall from $57.93 to $51.28. Similarly, the base beneficiary premium under Part D, which reflects the percentage of the average monthly bid amount attributable to Medicare beneficiaries, is slated to drop from $35.02 to $33.19.

What's behind the decline?

CMS attributed the price drops as being a direct result of pressure that the federal government has put on prescription drug manufacturers. By seeking to increase competition among suppliers of prescription drugs by granting more bargaining power to prescription drug plans under Medicare Part D, the Medicare program hopes to get the best possible deals for seniors.

CMS has already made progress in implementing some key reforms. For instance, new limits to the amounts that low-income beneficiaries pay for biosimilar drugs have helped cut costs, as has quicker substitution of generic drugs as they become available. Medicare participants also now have more options for which pharmacies they use, and greater competition among different Part D plans has made more plan options available to people on Medicare.

Surcharges for many high-income Medicare participants will drop too

Somewhat surprisingly, Medicare participants who have high income levels will see a further break. Under Medicare law, single taxpayers with incomes above $85,000 or joint filers with $170,000 or more in income typically have to pay surcharges above the ordinarily Medicare Part D monthly premium amount. In 2018, those amounts ranged from $13 to $74.80 per month depending on income level.

For 2019, those surcharges will be generally lower, with one exception for the highest-income participants. You can see below how the surcharge amounts will change depending on income levels.

Law changes have added an additional top bracket that didn't exist in 2018. Therefore, although those making less than $500,000 if single or $750,000 if filing jointly will all pay less in additional premium costs, top-earning Medicare participants above those limits will see a slight increase in what they pay every month for their prescription drug coverage under Medicare Part D.

Don't forget to look at your plan

The one wildcard that CMS didn't really discuss was how coverage options will change among popular Part D plans in 2019. For instance, one way that a plan provider can allow for less expensive monthly premiums is by offering less comprehensive coverage. That can include an increased deductible or copay or covering fewer prescription drugs. If your old plan no longer meets your needs, you might end up having to switch to another plan -- and paying more for the level of coverage you need.

In general, though, any trend toward lower healthcare costs is a good thing, especially for older Medicare participants living on fixed incomes. Be ready to get the information you need in order to get the right coverage for your needs when open enrollment for Medicare begins in mid-October.