Please ensure Javascript is enabled for purposes of website accessibility
Log In Help Join The Motley Fool
Free Article Join Over 1 Million Premium Members And Get More In-Depth Stock Guidance and Research
By Dan Caplinger - Sep 8, 2018 at 6:45AM

Find out the rules to see if you qualify.

Those who serve in the U.S. Armed Forces make huge sacrifices for the benefit of the nation, and their service creates substantial financial challenges both for themselves and their families. That's a big part of the reason why veterans and their families sometimes can get benefits under a range of programs that give them access to education and training, mortgage loans, and healthcare coverage.

The Veterans Administration (VA) provides a need-based pension program for those veterans who served their country. Yet in addition to paying veterans a monthly income, the VA also offers a survivor pension for military spouses and children. To qualify, both the veteran and the family member must meet certain requirements, but if you're eligible, the payments can make a huge difference in helping you make ends meet. 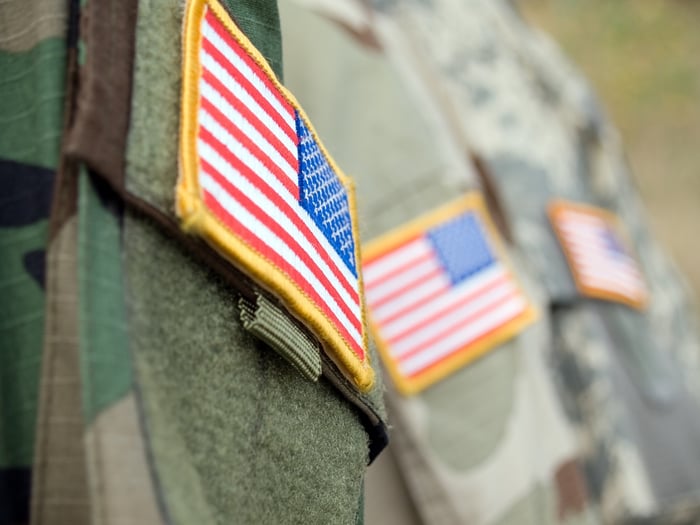 Whether a veteran's family is eligible for benefits depends, in part, on when and how long the veteran served in the Armed Forces. At a bare minimum, a veteran must have served at least a 90-day period in active-duty status. However, for many former military members, a longer active-duty requirement applies, because those who first entered active duty in September 1980 or later usually must have a service history of at least 24 months, or the full period for which the veteran was called up to active duty.

In addition, eligibility requires that the veteran has served at least one day during a wartime period. That requirement isn't as onerous as it might sound because wartime periods, as currently defined, include the Gulf War -- which has not had an end date specified since its start in August 1990. Those who served in Vietnam between 1961 and 1975 also are eligible, as are those who served during World Wars I and II or in Korea.

Finally, the veteran must not have been discharged dishonorably. Honorable discharges are best, but general discharges also allow pension benefits to be paid.

Which family members are eligible for survivor benefits?

A VA Survivor Pension is typically available for surviving spouses and certain children. For a spouse, the only requirement is that you must not have remarried. Children must be under 18 years old, under 23 and attending a VA-approved school, or permanently incapable of supporting themselves due to a disability that occurred before the child reached 18.

How much is the pension payment?

As with the regular VA Pension, it's challenging to calculate exactly how much the VA Survivor Pension will be. That's because you're typically allowed to get up to a certain maximum amount per year, but income that you get from other sources can count against that maximum amount, resulting in a smaller pension.

Each year, the VA sets maximum annual pension amounts for several categories of survivors. You can find the current version of the table below, effective as of Dec. 1, 2017:

Source: Veterans Administration. *Additional amounts of $572 and $510, respectively, apply for veterans of the Spanish-American War.

Those with more than one child should add $2,250 to the figures above for each additional child. In general, if a child is in the custody of a surviving spouse, then any child benefits are wrapped into what gets paid to the surviving spouse.

The VA then takes your countable income and subtracts it from the maximum pension rate above. Countable income includes wages and salaries, income from investments, other pension or disability benefits, and income from a business or from farming. So if you have no dependents and have $5,000 in countable income for the year, then your survivor pension would be $8,830 minus $5,000, or $3,830. That annual amount would get paid in 12 monthly payments of about $319.

Does it matter if I have savings or other assets?

Yes. The VA Survivor Pension also looks at any assets you have, including bank accounts, stocks, bonds, mutual funds, annuities, and any property other than your residence. If the Veterans Administration determines that you have assets that are large enough to live off for a reasonable period of time, it has the option of denying a survivor pension. The VA doesn't provide any specific dollar amount or rules, but has a lot of latitude in making its decisions.

How do I apply for a VA Survivor Pension?

To apply, you'll need to complete VA Form 21P-534EZ. You then can either mail it to the pension management center that serves veterans in the state where you live or visit your local regional-benefit office in person to turn in your application. For details on where the nearest office is, you can use the VA's facility locator, accessible on the VA website for pension benefits.

Let your country return the favor

If you're in a military family, you know all too well the sacrifices you've made for your country. VA Survivor Pension benefits can give you a bit more financial peace of mind at a time when you need it the most.