Saving toward retirement is challenging for many Americans. Given all of the competing demands on your paycheck, it can be hard to set aside money that you won't need for years, or even decades. But even though many people aren't as diligent as they should be about retirement saving, they've still done a good enough job that the majority of Americans are confident they'll have enough money to retire comfortably.

The 2018 version of the Employee Benefit Research Institute's Retirement Confidence Survey [opens PDF] asked both workers and retirees how confident they were about their retirement prospects. The figures were encouraging, with 75% of retirees and 64% of workers feeling either very or somewhat confident that their savings would let them live comfortably during their retirement years. That's an improvement compared to where similar figures were in 2009, during the heart of the financial crisis. 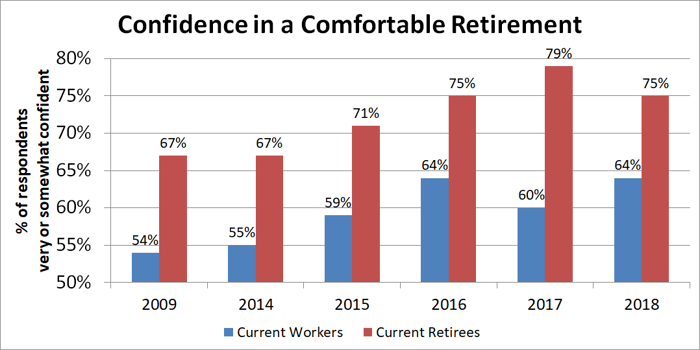 What's interesting, though, is that in the past year, retirees have gotten less confident even as workers have seen their confidence improve. That likely reflects the role the economy and the stock market play in the prospects for the two groups. For workers, a booming U.S. job market has started to result in rising wages, which bodes well for their ability to save more in the future toward retirement. For retirees, however, more volatile stock markets put their larger investment portfolios in greater jeopardy, weighing somewhat on confidence.

Regardless of how confident you are about your retirement, it still takes work to put a plan in place to make a comfortable retirement a reality. By taking steps now to improve your financial condition, you'll be more likely to have the retirement that you really want.