Warren Buffett is one of the richest people in the world. Despite the immense gap between his wealth and what most of us mere mortals can hope to achieve, a retirement much like his may very well be within your reach.

You see, Buffett is 88 years old, and he's still working. As CEO and chief capital allocator for Berkshire Hathaway (NYSE:BRK.A) (NYSE:BRK.B), he has no plan to call it quits in the immediate future. If you're willing and able to plan for it, you too can design a future that keeps you active, engaged, and relevant well into your golden years. 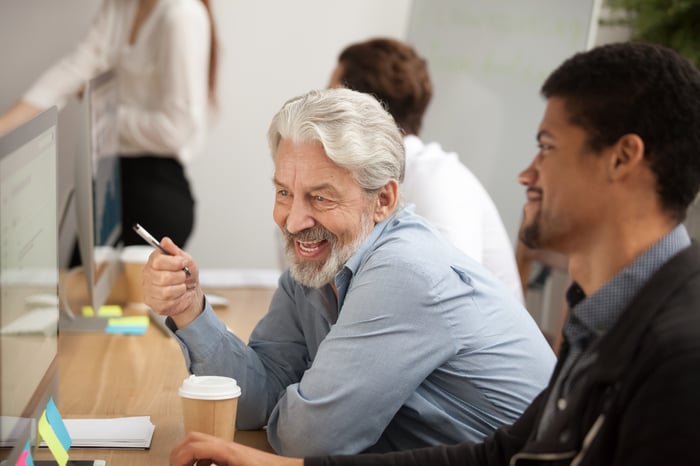 It's not as simple as "just keep working"

Staying employed that far into your 80s is no small accomplishment. As anyone who works in a physically demanding field, has ever had a health scare, or has faced a mandatory retirement age can tell you, keeping a job can get tough as you age. Buffett has created a strong structure around himself that gives him the opportunity to keep working long after others have stopped.

While you may not ever become CEO of a multinational company like he has, you can put plans in place similar enough to his that you can keep yourself engaged long after your peers have called it quits. The key factors to Buffett's success include:

These factors all work together to enable Buffett to remain employed, and they can work for you, too.

Buffett owns around 283,000 shares of Berkshire Hathaway's Class A stock. At around $314,477 per share, that's around $89 billion tied up in the company he leads. Like any owner of that stock, he has a say on the company's board of directors and leadership team, and because he is a substantial shareholder, his vote is particularly impactful. As a result, as long as he wants to remain CEO and his mental and physical health hold out, he will very likely remain CEO.

Although it's unlikely you'll own that big a stake in that large a company, you can own your own small business and have about the same level of control over your ability to keep running it. If you haven't been an entrepreneur before, you might find buying a franchise or the small business of someone else who's ready to retire a smoother path than starting a new company from scratch.

Going that route, you're essentially buying yourself a job. And if you buy a proven business model or buy into a franchise, you are somewhat limiting your options to those within the structure of that business or franchise. Still, if your goal is to remain active, engaged, and involved well beyond an ordinary retirement age, being the owner gets you a lot of say over whether you get to do that.

Solid control over money that works for him

With a net worth of around $89 billion, Buffett could spend more than $2 billion a year more than he earns and still be incredibly likely to not outlive his savings. Still, he's famous for living in the same house he bought in 1958 for around $31,500 and eating his breakfasts for $3.17 or less at McDonald's (NYSE:MCD). By having money that works for him and keeping his costs under control, Buffett is financially independent.

That's valuable to your quest to retire like Buffett, even if your net worth is well below 0.005% of his. Cash flow management is an essential skill for any household or small business. Bankruptcy from spending more than you take in, after all, is one of the only things aside from health that can force you out of a job when you own the company.

You don't need Buffett's billions in financial flexibility to have control over your own finances, but you do need a solid grip on the money going out and the money coming in. As long as more money regularly comes in than goes out, you have enough flexibility to cover your own needs. That's good enough to be in sufficient control of your finances to keep yourself active and engaged as long as you choose to do so.

A job he clearly enjoys

With somewhere in the neighborhood of $89 billion to his name at age 88, Buffett could call it quits or change his occupation should he choose to do so. Yet he still shows up to work and indicates he has no plans to retire anytime soon. Clearly, he loves his job, and going to work means more to him than having that many more hours in his day back to do anything else he chooses.

Likewise, even in your golden years, you still have 24 hours in your day and seven days in your week. If you are able to fill your time with personally meaningful work that you enjoy doing, why stop? Many retirees report boredom as one of the unexpected side effects of life after work. With a meaningful job you enjoy, you can fill your days far more productively than simply rocking on the porch, watching the world go by.

Work he can accomplish even as his body ages

Buffett has admitted that he's physically not what he used to be. If he were in a physically demanding job such as a warehouse operator or construction worker, he might have already been forced to cut back or retire simply because his body couldn't handle it anymore. As it is, his chief responsibility is capital allocation for Berkshire Hathaway. For that work, he needs a sharp mind, which is possible to keep despite a body that is showing signs of age.

Likewise, as you look forward to your own active career that lasts past a standard retirement age, you should plan for work that you'll be able to manage as your body changes with age. Remember that being the boss via a strong ownership position and control over your own cash flow lets you choose what to do. You can choose what to work on based on what interests you and what you can accomplish, and as long as you're the owner, nobody is really in the position to take that away from you.

Want to retire like Warren Buffett? Get started now

Buffett has the ability to keep working well past a standard retirement age because he has put himself in the position to be successful even as he ages. He's an owner and in control over his own cash flows. He clearly enjoys what he does, and the work he does can be done even by those who aren't physically what they used to be.

Even if being the CEO of a multinational company isn't in your future, you can follow what worked for him to improve your chances of remaining successfully employed long past a traditional retirement age. The first and most critical step is to make sure you're in control of your cash flows. From there, you can set the rest in motion and set the stage for many productive decades to come.

Here's How You Can Retire Like Warren Buffett @themotleyfool #stocks $BRK.A $BRK.B $MCD Next Article
Current