Reaching retirement in a financial position that will allow you to enjoy it is hard enough even if you do everything right.

It's no secret that traditional pension plans are quickly dying out in America. In fact, just 15% of U.S. workers in the private sector currently participate in one. Which means that the vast majority of workers are entirely responsible for setting aside money for their own retirements. These days, if employers choose to help, its usually by offering a 401(k) plan.

Nearly 79% of U.S. workers have access to a 401(k) plan, and they can be an excellent tool for building your retirement wealth -- but only if you tap into their best aspects, and avoid making certain expensive mistakes -- like these. 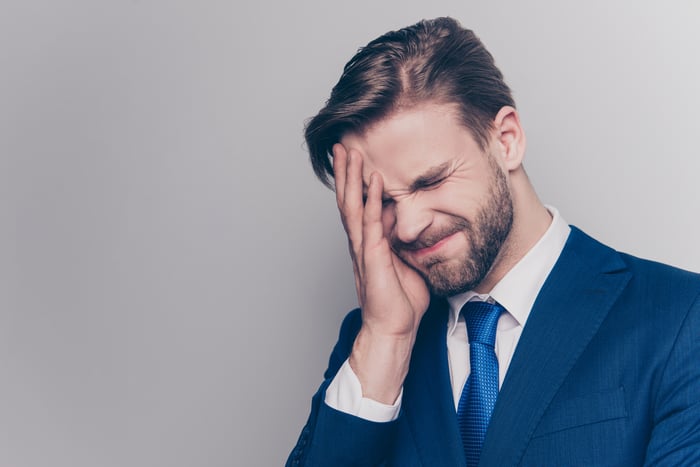 1. Not signing up when your employer offers it

Of course, one of the worst mistakes you can make with your 401(k) is not taking advantage of it in the first place. Recent Census Bureau data shows that among workers at companies that offer 401(k) plans, just 41% have signed up.

That's not good news, because those who have failed to take this basic first step are unlikely to have much of a retirement plan in place, which is liable to leave them reliant on Social Security for the lion's share of their post-employment income.

There are at least two problems with this strategy: First, it means they are missing out on the magic of compound growth. Even if you can't max out your 401(k) contributions -- the annual limit will be $19,000 in 2019 -- if you add something, that money has the ability to make you more money.

Second, if people are foregoing the chance to invest via a 401(k) under the assumption that they'll be able to cover their bills out of their Social Security benefits when they retire, they're in for an unpleasant surprise down the road. For most people, those checks won't be enough to meet expenses. Consider that right now the average monthly Social Security check is just $1,413.

2. Not taking full advantage of you employer's match

If you do participate in your employer's 401(k), always contribute at least enough to get the full benefit of whatever matching program they offer. Nearly 75% of companies that offer 401(k) plans have a matching offer under which they add extra money to your account based on the percentage of your salary you contribute, up to a set ceiling. Yet a recent survey by Willis Towers Watson says that one in five employees don't contribute enough to take full advantage.

Now, that may not seem like a ton of money. But give that extra cash your employer is pitching in (and your own) several decades to appreciate via compound growth, and your nest egg begins to add up.

3. Not increasing your contributions as your salary grows

It can be easy to set up your 401(k) plan, then let years go by before revisiting the choices you initially made. For example, if early in your career -- when money may be particularly tight -- you allocate 6% of your salary so that you can get the full employer match, that's a great first step. But in reality, workers should be aiming to save at least 10% of their salary for retirement.

That can sound like an impossible amount of money to be set aside each month, but one excellent, and less painful, way to hit that target is by boosting your contribution percentage each time you receive a raise. This will allow you to ramp up your savings without feeling it as much in your monthly budget. It's hard to miss disposable income that has never been in your paycheck to begin with.

The larger, long-term goal here is to get to the point where you're contributing the maximum allowable amount to your 401(k) every year.

If you have a pressing need for cash, it can be tempting to take out a 401(k) loan, primarily because you'd technically be borrowing from yourself, and paying interest to yourself. As far as loan agreements go, those sound like pretty great terms. Unfortunately, it's not as simple as that.

For one thing, if you fail to repay the loan within five years, the entire amount you've borrowed then becomes taxable (although extensions are available under some circumstances). Additionally, if you're younger than 59½, you'd have to pay a penalty for taking out the money early.

Most people don't default on their loans -- just 10% do, according to 2015 data collected by the National Bureau of Economic Research -- but there are other negatives. For example, if you leave your job while the loan is outstanding,  you'll likely have to pay back it back in full quickly, or face a hefty tax penalty.

But perhaps worst of all, the money you withdraw is not invested until you repay it, so it is not growing. In the end, you're borrowing from your future to fund today's costs. That's not the best way to cover your expenses, and it won't help you build up the retirement funds you'll need later.

When you sign up for a 401(k), you'll be given choices of many different types of funds to can invest in, but there are two key categories among them that you should distinguish between: actively managed funds and passive funds.

The word "passive" gets a bad rap under many circumstances, but when it comes to your 401(k), it's often the better choice. There are two reasons for this: First, actively managed funds typically have higher expense ratios that can eat into your gains.

Second, while the idea of an actively managed fund sounds better -- after all, someone is actively making choices in an effort to improve the fund's returns -- these funds often fail to outpace the market over the long haul. The S&P Dow Jones Indices' SPIVA annual report found that in 2017 just 8% of large-cap active fund managers beat their benchmark index over a 15-year period. For those keeping score at home, that means a staggering 92% failed to beat the benchmark.

In most cases, you'll be much better off choosing low-cost index fund that simply matches the broader market benchmarks. Not only will your expense ratio be less than you'd pay for an actively managed fund, but the odds favor your returns being better as well.

If you've made any of these 401(k) blunders, don't beat yourself up. There's hardly anyone out there who's retirement planning strategy is flawless. But there's never a better time than now to start looking for find areas where you could improve on how you're handling your retirement planning, and making changes. Most retirees will need much more than just their Social Security income to cover their retirement expenses. Making some smart 401(k) moves now will give you a far better chance of having the necessary funds later.