An annual boost gave retirees some extra money for 2019.

Living on a fixed income is difficult, but for millions of people on Social Security, the monthly benefits they get make up the vast majority of the money coming in during retirement. Fortunately, during most years, Social Security payments go up modestly to make up for increases in living costs. However, even those regular boosts aren't enough to make things much easier for America's older population.

For 2019, retirees got better news than they've gotten in a long time. A fairly high cost-of-living adjustment produced a big raise for Social Security recipients, and that was primarily responsible for the increase that sent the average Social Security benefit for all retired workers to $1,461 per month in January 2019. That was the biggest increase in dollar terms in years, and you have to go back to 2011 to find a larger percentage boost. 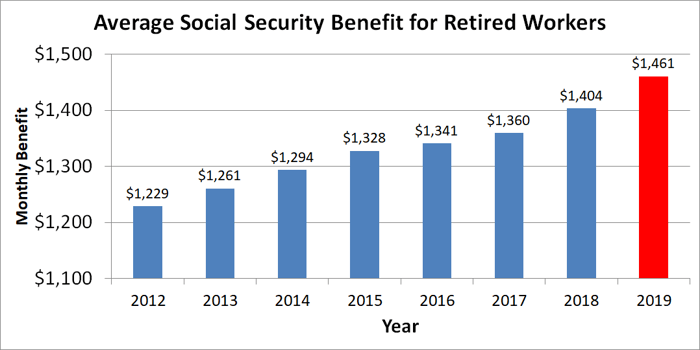 Unfortunately, there's a catch. When cost-of-living adjustments are high, it's typically because the expenses that seniors have to pay have gone up. In fact, many argue that the measure of inflation that the Social Security Administration uses to calculate annual increases in benefits is fundamentally flawed, tracking a mix of expenses that fails to reflect the goods and services that older Americans need.

Moreover, not everyone gets this much money. Surviving spouses can expect to get an average of $1,386 this month, or about $75 less than a retired worker. Couples in which both spouses get benefits will average $2,448 for the month -- roughly $475 less than double the per-worker amount. For each individual, benefits depend on length of career, average earnings, and the type of benefit you're entitled to receive.

Because the recent adjustment reflects price increases that they already had to pay over the past year, Social Security recipients will be glad to see their benefit checks finally catch up. It might not be as much as they'd like, but Social Security still plays a vital role in helping retirees make ends meet financially.