Social Security provides tens of millions of Americans with a big portion of the money they need to make ends meet in retirement, as well as covering millions more who become disabled earlier in their careers. Workers pay into the Social Security system through payroll taxes during their working lives, and what they earn helps determine how much they receive in benefits during retirement.

Yet Social Security isn't as simple as it could be, and there are many surprising aspects to the program. For instance, what many people don't realize is that even though Social Security retirement benefits go up as your average career earnings rise, those payments don't go up in a straight line. That's the case even though the amount that you pay into Social Security is generally directly proportional to the size of your paycheck. Instead, as you can see below, monthly retirement benefit amounts go up quickly as earnings rise in the low-income area. Then they go up more slowly for middle-income earners, and slower still for high-income workers. 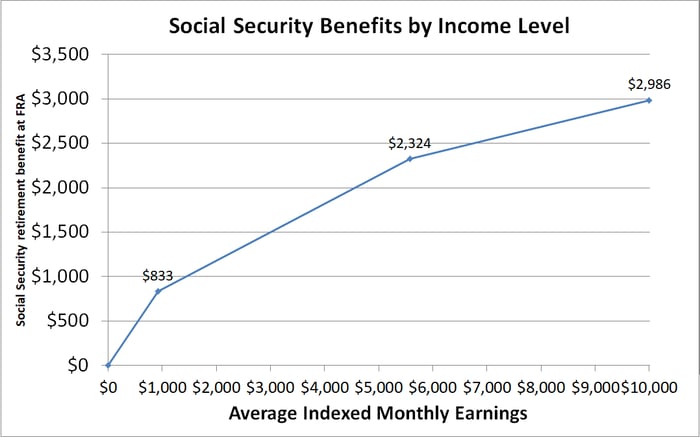 The secret lies in the benefit formula for Social Security. The two places where the line above changes its slope are appropriately known as "bend points," and they're designed to reflect the primary purpose of Social Security as a means of providing a basic financial supplement for older Americans. Social Security was never meant to replace all of a retired worker's income, but it comes closest to doing that for those with the lowest incomes. As average earnings rise, Social Security replaces a progressively smaller percentage of what you earned in your paycheck during your career.

Because of Social Security's financial challenges, many policymakers have looked closely at making further changes to the program's benefit calculations. Some would increase benefits at the lower end of the scale, while others would look at adding provisions like means testing that would essentially reduce the amount that upper-income workers receive from the program. Regardless of which direction legislators eventually go with their proposed solutions to the looming financial crisis that Social Security faces, those who count on benefits from the program can expect to see the same differences in treatment between lower-income and higher-income individuals persist into the foreseeable future.