If you want to fix the program, here's what you have to know.

Nearly every American expects to rely on Social Security to provide them with valuable income after they retire. Roughly 60 million people get benefits from Social Security, and recent news about the financial health of the program has many people nervous about whether those benefits will continue to be there when recipients need them.

Social Security gets its funding from three primary sources, so in order to address any financial problems Social Security has, you have to look closely at each of those revenue generators. Unless you want to cut benefits, maintaining the fiscal viability of Social Security will require changes to boost program revenue -- and that makes it critical to understand how each of these funding sources works.

The chart below shows how those three sources compare in terms of size as of 2018, the most recent year for which full statistics are available. 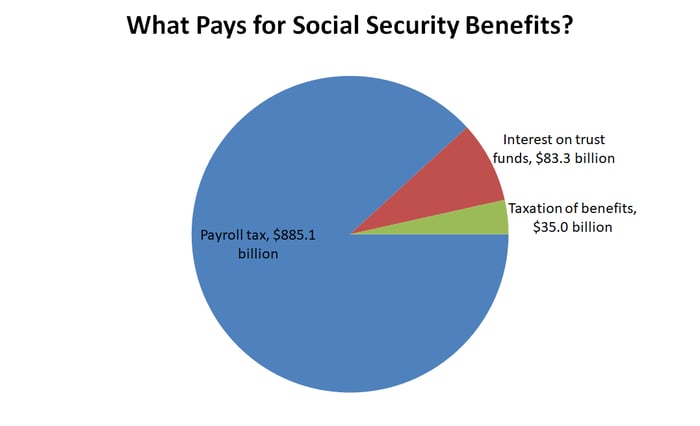 As you can see above, the largest source of funding comes from payroll taxes that most workers pay into the Social Security system. For employees, a 6.2% payroll tax applies that goes toward Social Security. Employers pay a matching 6.2% amount on the worker's behalf. For those who are self-employed, the full 12.4% amount gets included in the self-employment taxes that the IRS collects.

How income taxes and interest add to Social Security

Workers end up paying the lion's share of money that goes toward Social Security, but they're not responsible for everything the program brings in. Benefit recipients have to include a portion of their benefits in taxable income if their countable income exceeds certain threshold levels. The exact calculations are complicated, but in a nutshell, you take half your Social Security benefits received during a year and then add in income from other sources. If that total number is above $25,000 for singles or $32,000 for joint filers, you might have to include as much as half your benefits as taxable. A higher maximum of up to 85% applies if your countable income is larger than $34,000 for singles or $44,000 for joint filers.

Note that the amount included in taxable income doesn't mean that you have to pay that full amount to the IRS. Rather, your regular tax rate applies to the part of your Social Security income that's included. So most taxpayers will end up paying somewhere between 10% and 24% of that amount in taxes. Add all that up and you get the roughly $34.5 billion figure indicated above.

Finally, the Social Security trust funds have substantial assets that generate interest. With almost $2.9 trillion in assets invested in government securities, the trust funds generated $83 billion in interest in the most recent year.

Unfortunately, that number is likely to go down in the future. As benefit obligations begin to exceed program revenue, Social Security will have to use trust fund assets to cover shortfalls. That will reduce the remaining trust fund balances, leaving less money to earn interest. Combine that with interest rates that have remained relatively low, and it's almost certain that interest will play less of a role in helping to support the total revenue that Social Security brings in.

Policymakers have looked at various solutions to address Social Security's financial challenges, including raising the limit on income subject to payroll tax, adjusting the thresholds above which benefits get taxed, and expanding allowable investment of trust fund assets to try to generate greater levels of interest or other investment income. But in all likelihood, it'll end up taking a combination of solutions in order to bridge the entire gap and ensure that Americans get all the benefits that they expect indefinitely into the future.