Please ensure Javascript is enabled for purposes of website accessibility
Free Article Join Over 1 Million Premium Members And Get More In-Depth Stock Guidance and Research
By Maurie Backman - Jun 27, 2019 at 5:00AM

The quick answer: It depends on how much you earn.

Millions of people rely on Social Security, and the money to fund the program comes heavily from taxes paid by working Americans. If you take a look at your paystubs, you'll notice that you pay something called FICA tax. That's short for the Federal Insurance Contribution Act, and it's how two key programs -- Social Security and Medicare -- get their funding. But whereas you're guaranteed to pay Medicare taxes on all of your income, the same does not hold true for Social Security.

All workers are required to pay Social Security and Medicare taxes, but if you're a salaried employee, you're only responsible for half of that liability, as your employer will pick up the second half of that tab. If you're self-employed, you're required to foot the bill for all of your FICA tax, but you'll get the option to deduct half of that sum on your taxes.

For Medicare purposes, you'll pay a 2.9% tax on all of your wages. Again, if you're employed by an outside company, you'll only pay half that amount, or 1.45%. Social Security, however, has an earnings cap for tax purposes, which means that once your income reaches a certain level, you're no longer liable for taxes. That level changes from year to year, and for 2019, it's $132,900. 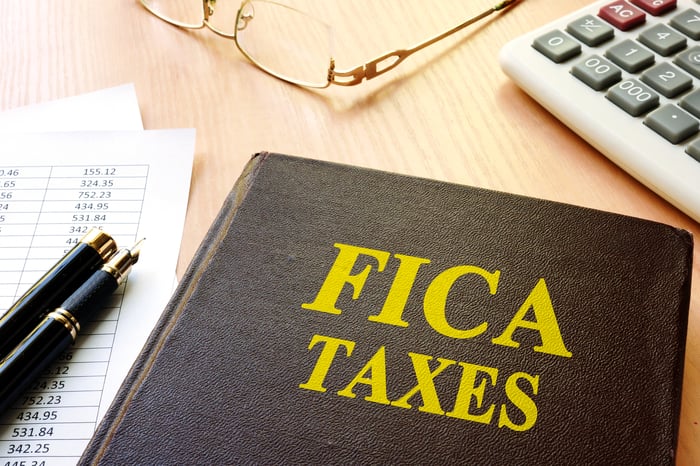 Many lawmakers believe that the current tax setup is unfair with regard to Social Security, and many workers no doubt feel the same. For example, if you earn $140,000 a year (which may or may not be a lot of money, depending on the cost of living where you're located), you may be wondering why you're paying the same amount of Social Security tax as someone who earns millions of dollars a year.

Unfortunately, there's really no good answer other than "because that's the way things have been for years." But if you're in the camp of people who believe that the current system unfairly favors the rich, you can rest assured that many politicians feel similarly and are pushing for change, especially given Social Security's shaky future. Though the program has enough money to keep up with its financial obligations at present, come 2035, when its trust funds run out, it may have no choice but to cut scheduled benefits, thereby leaving millions of people to struggle. Proponents of lifting the earnings cap say that all of that added tax revenue could help compensate for Social Security's impending shortfall.

On the flip side, some argue that FICA taxes are already a burden for what we'll call moderately high earners -- folks who may earn more than $132,900, but not so much more that they're rolling in money. This especially holds true for workers who earn higher salaries but who live in expensive housing markets where a starter home, for example, costs four times the national average.

So, what's the solution? Right now, there is none. But as someone who pays taxes, it makes sense to stay aware of what your personal burden is for Social Security purposes. This especially holds true if you're self-employed and are responsible for forking over your entire Social Security tax bill without any help from an employer.