Money is the No. 1 source of stress among Americans, according to a survey from Northwestern Mutual, and 87% of adults say they're never happier than when their finances are in order.

Financial security can impact your life in significant ways. If you've made poor financial decisions in the past -- whether it's racking up loads of debt, missing loan payments and lowering your credit score, or not saving a dime for retirement -- it can impact your financial health for years to come.

Only 40% of Americans consider themselves financially secure, according to a report from market research company YouGov. Factors that impact financial security can include whether an individual carries debt or owns property, but one of the more significant factors is income. Unsurprisingly, individuals with higher incomes tend to be more financially secure than those who are earning less. But you don't need to be super wealthy to be financially healthy. 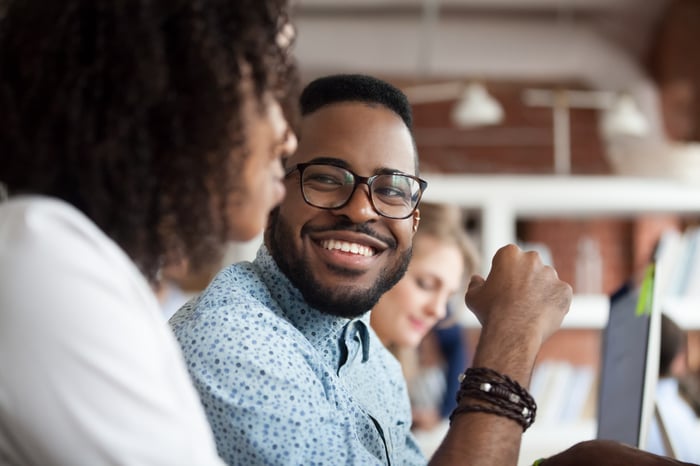 The key to financial security

Does that mean that in order to be financially secure, you must earn at least $60,000 per year? Or at least more than $30,000 per year? Not necessarily. While more income can absolutely help improve your financial health, it won't solve all your problems. If poor financial decisions are what led to money issues in the first place, a higher income won't fix the root of the problem. If anything, it could simply exacerbate the issue -- particularly if you struggle with spending more than you earn.

The real key to financial security is making smart spending and saving decisions.

One of these smart money decisions includes paying off as much debt as possible. Only 34% of people who carry student loan debt consider themselves financially secure, according to YouGov, but that number jumps to 45% among those who have paid off their debt. Similarly, if you have high-interest debt that's costing you thousands of dollars in interest each year, paying that down can free up some cash that you can put toward other financial goals.

Saving for retirement is another factor that can improve your overall financial health. The average American is woefully behind on savings, and half of adults age 55 and over have nothing at all saved for retirement, according to the U.S. Government Accountability Office. If you eventually retire with little to nothing saved, you'll likely be forced to depend on Social Security benefits. And with the average check amounting to just $1,461 per month, that will likely put you in a tight spot.

Part of creating a financially secure lifestyle involves making smart choices now that impact your life later. By saving for retirement now, you can build a solid foundation for the future. Also, it's much easier to save now than try to catch up later. While you may only need to save a couple hundred dollars per month if you still have decades before retirement, if you wait until you're just a few short years from retiring to start saving, you may need to save thousands every month to reach your goal.

If money is tight, you may be most concerned with immediate financial needs, like putting food on the table and paying the bills -- not saving for retirement. But even if you're earning less than $60,000 per year, you can still make smart money decisions to improve your financial health.

First, consider how much money you have to put toward your financial goals, like paying down debt or saving for retirement. Comb through your budget and figure out exactly where all your money is going each month. Are there certain things you can live without or with less of? You don't need to take a machete to your budget, but even small cuts across various spending categories can add up.

Next, once you have some extra money each month, figure out how you want to distribute it among your various financial goals. It's a good idea to put at least a little toward retirement each month to avoid having to save a lot more later. And high-interest debt like credit card debt can be incredibly expensive, so paying that down as quickly as possible can save you a lot of money in the long run.

Establishing an emergency fund is another option when determining where to park your extra cash. Although creating this "rainy day" fund may take money away from your other goals temporarily, it saves you money in the long term. If an unexpected expense pops up, you can pull the money from your emergency fund rather than racking up credit card debt or taking the cash from your retirement account (and possibly paying penalty fees for withdrawing the money early).

Managing money might seem easier if you're earning fatter paychecks, but ultimately, financial security comes down to making smart money choices regardless of how much you're earning.