If you're behind on building a next egg, all hope is not lost.

Retirement is becoming more and more expensive, with the average workers estimating they'll need to have about $1.7 million saved, according to a survey from Charles Schwab.

But even though workers may know that retirement won't be cheap, their savings aren't keeping up with the rising costs. Roughly a quarter of U.S. workers have less than $1,000 saved for that stage of life, a survey from the Employee Benefit Research Institute found, and more than half have less than $50,000 stashed away. 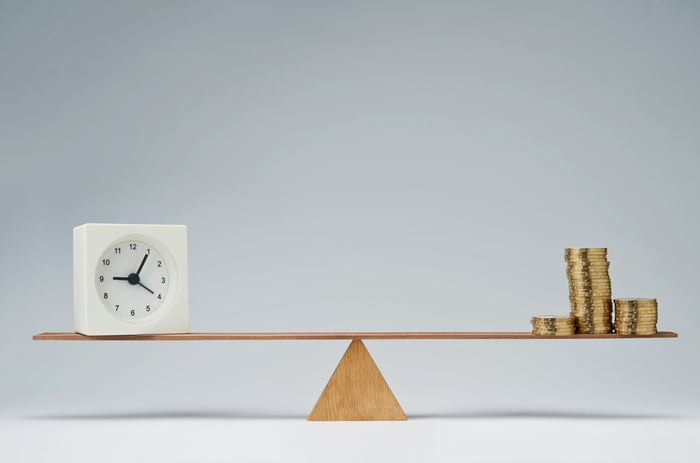 Even among baby boomers, savings are sparse: only about 30%, on average, of what they should save, according to Clever Real Estate's American Financial Wellness Survey -- and that number could be even more dismal than it appears.

The study assumed the average boomer would need to save around $456,000 by retirement age, but in reality, life after leaving the workforce could be far costlier. The average person 65 or older spends around $46,000 per year, according to the Bureau of Labor Statistics, so if you live 20 years past 65, that's a total of $920,000 -- not even accounting for inflation.

So it seems the average worker isn't doing enough to prepare. But even if you're falling behind, it is possible to catch up -- with the right strategy.

The age you plan to retire will affect your entire savings plan, because every year counts when it comes to building a healthy nest egg. Even retiring one or two years earlier than you anticipated can throw your plan off track, making it more difficult for you to save as much as you should.

When you're thinking about your ideal retirement age, be honest with yourself about what's realistic. If you're not in the best health, for instance, it may not be reasonable to expect to work until you're 80 years old. That said, if you're significantly behind on your savings, you'll likely need to work as long as you can to give yourself as much time as possible to save.

It's also a good idea to think about at what age you plan to claim Social Security benefits. You can begin claiming benefits as early as 62, but by doing so, you'll receive smaller checks each month. To receive the full amount you're entitled to, you'll need to wait until your full retirement age (FRA) -- which is either 66, 67, or somewhere in between. And if you wait until after your FRA to claim, you'll receive extra money each month in addition to your full amount.

You don't have to retire and claim benefits at the same time, but if your savings are falling short, it might be beneficial to delay benefits and retirement to save more and earn those fatter checks each month.

There are several ways to estimate the amount you should aim to save by the time you retire, but one of the easiest is to run your numbers through a retirement calculator.

Again, be honest here about your expectations. For example, don't simply assume you'll only spend 75% of your pre-retirement income; you might end up spending more than you think. You can't predict every expense you'll face, but you can at least get a fairly good idea of whether you'll spend more or less than you do now. You might even come up with a rough retirement budget to estimate your future costs and see how they compare with what you currently spend. The more accurate your estimate is now, the better off you'll be later.

Also, try to figure out roughly how much you can expect from Social Security. You can check your statements online by signing up for a mySocialSecurity account, which will give you estimates of your benefits based on your real earnings.

Once you know approximately what you'll be receiving, it will help you determine what you need to save on your own. For instance, if you've determined you'll need around $60,000 per year to cover all your retirement expenses and you'll be receiving roughly $20,000 per year in Social Security benefits, that means only $40,000 of your yearly income will need to come from your retirement savings.

Step 3: Find areas of your budget to make cuts

Depending on whether you're on track or behind on your savings, you may need to make some significant financial adjustments.

For those who are mostly on track but need to boost their savings slightly each month, you can probably get away with simple cuts like skipping takeout once or twice a week and reallocating the money to your savings. But if you've got a lot of lost ground to cover, you'll need to take more drastic actions.

If you're serious about saving more, you'll need bold financial moves. Downsizing your home, selling your car, and ditching any costs that aren't truly necessary can all help you save as much as you need. You may even choose to pick up a side job, or consider working a few years longer than you had planned. Just remember that if you aren't willing to make sacrifices now, you'll have to make sacrifices in retirement.

Once you've set your goals and have found some extra cash to set aside, make sure your money works as hard as possible.

It might be tempting to stick it into a savings account, CD, or other relatively "safe" place to protect it, but those types of investments can actually be riskier because your money won't be able to grow as quickly as you need it to. Savings accounts, CDs, money market funds, and other safer investments only earn rates of return of around 2% to 3% per year, which will barely keep up with inflation. Instead, to make the most of your money, invest in index funds and mutual funds to earn higher rates of return while still limiting your risk.

If you're behind on your nest egg, you'll need to work extra hard to catch up, but it can be done. Although it's a lot of effort now, it will pay off in a comfortable retirement.