Please ensure Javascript is enabled for purposes of website accessibility
Free Article Join Over 1 Million Premium Members And Get More In-Depth Stock Guidance and Research
By Kailey Hagen - Nov 10, 2019 at 10:00AM

People of all income levels retire, but how they experience retirement can differ dramatically.

In retirement, as in every other stage of life, high-income and low-income households tend to lead different existences. Yes, they all spend money on necessities like food, housing, and healthcare, but how much they spend and the proportion of their budgets that these necessities take up vary. This, in turn, affects the quality of one's retirement.

A recent Employee Benefit Retirement Institute (EBRI) study investigated the differences in retirement spending between high-income and low-income households, and it returned some interesting results. For the purpose of the study, it considered households to be high income or low income based on whether their income fell above or below the median income for their age range. This is $65,000 for adults aged 50 to 64, $49,000 for adults 65 to 74, and $30,000 for adults 75 and older. 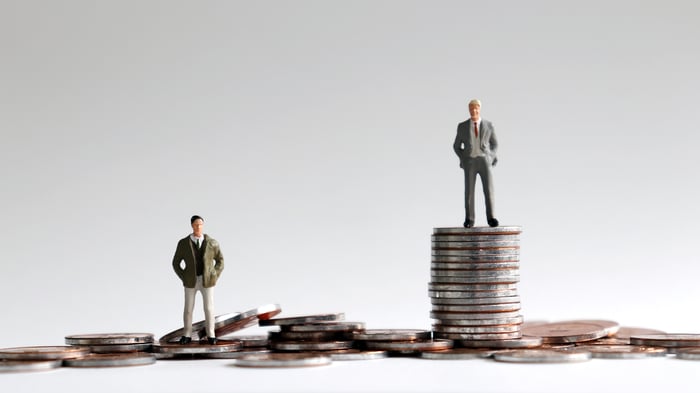 The study found that low-income households tend to spend a larger proportion of their budgets on basic necessities, like housing, food, and healthcare. While housing only took up around 44.2% of the budget for high-income adults aged 50 to 64, it took up 47.3% for low-income households of the same age.

Things even out a bit as both groups age even more, with low- and high-income households spending 10.4% and 10.9% on healthcare, respectively, once they're 75 or older. This makes sense, as people tend to develop more health problems as they age and must devote more funds to healthcare, regardless of income. Adults 65 and older spend three times as much on healthcare as their working-age counterparts, according to the Center for Medicare and Medicaid Services.

The old adage tells us that money doesn't buy happiness, but it can certainly make a difference in the quality of your retirement. While low-income households seem to progressively tighten the belt on entertainment spending as they reserve their existing savings for their basic expenses, high-income households appear to spend more freely on leisure and gifts, suggesting a different experience of and outlook on retirement.

How you can cut costs on basic expenses in retirement

Low-income retirees who want to make more time for leisure and entertainment must bring some of their other living costs down to free up more cash. Housing is most people's largest expense, so cutting this back will save you quite a bit of money. You could explore downsizing or moving to a more affordable area. Homeowners should try to pay off their mortgages before retirement, if possible. Refinancing is also an option if you'd like to secure a lower monthly payment.

You may not have complete control over your healthcare costs, but taking steps to remain healthy as you age can improve your quality of life and minimize your healthcare spending. Once you're eligible for Medicare, take advantage of its free health and screening services, and consider purchasing supplemental insurance for things that Original Medicare doesn't cover, like dental insurance or hearing aids, so you don't have to pay for them out of your own pocket.

The above figures are averages. They don't reflect every individual case. A high-income individual who plans poorly and overspends on frivolous things could struggle to get by, while a low-income person who diligently saved for retirement and lives modestly might enjoy a comfortable retirement. If you want retirement to be a happy, exciting time in your life, begin planning for it now and look for ways to reduce your basic living expenses so you have more free cash for doing what you love.