Please ensure Javascript is enabled for purposes of website accessibility
Free Article Join Over 1 Million Premium Members And Get More In-Depth Stock Guidance and Research
By Katie Brockman - Nov 13, 2019 at 8:30AM

Saving for retirement is often touted as the most important financial goal to strive toward. And in truth, it is crucial to be preparing financially for your golden years. You may not be able to rely too much on your Social Security benefits in retirement, so if you don't have enough savings to live on, it might be a struggle just to make ends meet.

That said, it's not always beneficial to put all your extra cash toward your retirement fund. In fact, there are two scenarios where saving for retirement might actually do more harm than good. 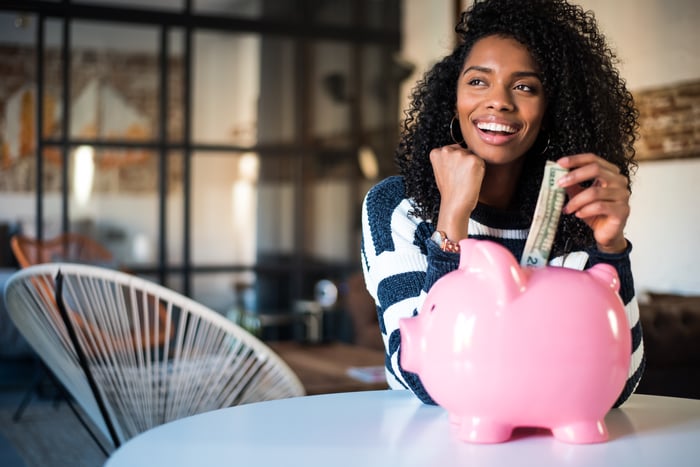 Scenario 1: You don't have an emergency fund

Establishing an emergency fund might seem like an afterthought when you're trying to prioritize your financial goals, but those who have one are 2.5 times more likely to feel confident about reaching their long-term goals than those who don't have any emergency savings, a report from AARP revealed.

An emergency fund is key to avoiding serious financial consequences if you're hit with an unexpected cost. If you incur a major expense that you weren't prepared for and you don't have enough savings to cover it, you'll either have to rack up credit card debt, take out a loan, or tap your retirement fund. When you borrow the money, you'll have to pay interest as well -- and depending on the interest rate and how much you borrow, you could end up paying hundreds or even thousands of dollars in interest alone by the time the debt is paid off.

Dipping into your retirement savings isn't ideal either, because if you withdraw the cash before age 59-1/2, you'll typically have to pay income taxes and a 10% penalty on the amount you take out. Even if you only borrow the money from your retirement account with the intention of repaying it, you're still undoing a lot of the hard work you've put into saving. That's because when you take money from your retirement fund -- even temporarily -- you're missing out additional compound growth. Compound interest allows your money to grow exponentially the longer it sits untouched in your retirement account, so if you borrow or withdraw some of that cash, it will affect your long-term savings.

For those reasons, if you don't have any money stashed in an emergency fund, it might be wise to build up your emergency savings rather than putting all your extra cash toward retirement. Focusing all your efforts on saving for retirement may sound good in theory, but if you're hit with an unexpected expense that buries you in debt or forces you to pull your money from your retirement fund to cover it, you're going to wish you had an emergency fund.

Many experts recommend saving enough to cover at least three to six months' worth of general living expenses, while others say you only need a couple of thousand dollars socked away to protect yourself from unexpected costs. Exactly how much you should save largely depends on your personal situation. If you have decades until retirement, you might be able to afford to build a bigger emergency fund and then catch up on your retirement savings. But if you're close to retirement age and your savings are slim, it might be best to stash away a couple of thousand dollars in your emergency fund first for some protection, then supercharge your retirement savings the best you can. Either way, it's important to have some money in an emergency fund so you're not at risk of undoing the hard work you've put into saving for your future.

Scenario 2: You have loads of high-interest debt

Most people have debt in some form or another, whether it's a mortgage, student loan, or car loan. But some types of debt are more dangerous than others, and the worst offender is high-interest debt.

High-interest debt typically comes in the form of credit card debt, with credit card companies charging interest rates of anywhere from 15% to more than 20% per year. Debt is a common struggle among Americans, with the average U.S. adult carrying over $6,000 in credit card debt, according to a recent report from The Ascent. That's a lot of money, and when you're paying sky-high interest rates, it could amount to paying thousands of dollars in interest alone by the time the debt is fully paid off.

If you're trying hard to save for retirement, you might only be making the minimum payments on your debt so you can put more money toward your retirement savings. Although that's a laudable idea, in reality, you might actually be losing money. Depending on what your retirement portfolio looks like and where exactly you're investing your money, you'll likely see annual returns between 6% and 10% when you invest in a 401(k) or IRA. If you're loaded with high-interest debt, you might be paying more in interest than you're earning on your investments.

That's not to say you should wait until all your debt is paid off to save for retirement. If you wait that long, you'll likely run out of time to save. But at least try to get your high-interest debt under control as quickly as you can so you're not paying an exorbitant amount in interest. Start with the debt with the highest interest rate, then work your way down the list until you're only left with lower-interest debt (like a mortgage or student loans). Once your most toxic forms of debt are paid off, you'll have more cash each month to supercharge your retirement savings.

Balancing retirement saving with your other financial priorities

It may seem counterintuitive to put saving for retirement on the back burner so you can focus more on other financial goals, especially since most of the retirement advice out there encourages saving as early as possible.

In general, it is a good idea to start saving as early as you can so you have plenty of time to build up a robust retirement fund. But if you're drowning in high-interest debt or don't have any savings to protect yourself against unexpected expenses, saving for retirement isn't as beneficial as you may think. Once you've got a couple of thousand dollars stashed in an emergency fund and your highest-interest debts are under control, you can go back to socking money in your retirement account without having to worry that an unexpected expense or interest payments will eat away at your savings.

Balancing your financial priorities can be tough, but if you want to make the most of your money, it's important to be strategic. By prioritizing creating your emergency fund and paying off high-interest debt, you can eventually save more for retirement and improve your overall financial situation at the same time.