Some people don't realize they need an emergency fund, and many others who do realize it keep putting off establishing one. That can be a costly mistake, because emergencies do happen.

Consider that "about one-half of full-time, full-year workers ages 51 to 54 experience an employer-related involuntary job separation after age 50 that substantially reduces earnings for years or leads to long-term unemployment," according to a report from The Urban Institute. Younger workers face possible job losses, too, and other financial disruptions can also occur, such as health setbacks or costly car repairs. 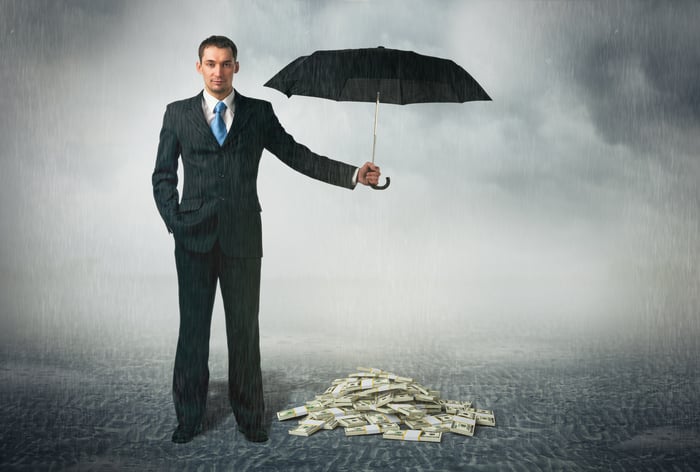 Aside from those reasons, here are three more reasons why you need an emergency fund -- stocked with about three to nine months' worth of living expenses.

1. It can keep you from racking up debt

For starters, having an emergency fund significantly reduces the chance that you'll take on costly debt in the event of some unexpected financial derailment. A recent report from SalaryFinance.com finds that nearly a third of working Americans are carrying medical debt, and more than a quarter of them owe more than $10,000. Worse still, many have defaulted on their medical (and other) debts -- and many carrying medical debt have been rejected for mortgages or apartment rentals because of that liability.

If you owe a lot on credit cards, it's likely to cost you a lot, because it's not uncommon for cards to charge interest rates of 20% or even more. Carrying a balance of $20,000 could mean that you spend $4,000 on interest charges alone. It can be hard to dig out of debt in such a situation -- though it can be done. Indeed, you really must pay off any high-interest-rate debt as soon as possible, so you can focus on building financial strength via an emergency fund, retirement savings, and more.

Having an emergency fund can keep you from having to pay all that interest and from ending up treading financial water, unable to get ahead.

2. It can preserve your retirement accounts

Another reason you need an emergency fund is to preserve your valuable retirement accounts, such as 401(k)s and/or IRAs. Without an emergency fund, you may end up borrowing from or cashing out a retirement account. That can be disastrous in several ways. For starters, it stops any borrowed or removed funds from growing for you. Imagine, for example, that you remove $10,000 from a retirement account for five years. If your account was growing at an annual average rate of 8%, that money, had it been left in place, would have grown to around $14,700 in five years. So you'd be losing out on $4,700 of growth.

Borrowing from retirement accounts because you don't have an emergency fund can short-change your future financial security.

3. It can keep your roof over your head

The last reason why you need an emergency fund is simply to keep a roof over your head. If your finances fall apart just because you were out of work for five months, you might end up not only taking on a lot of debt and possibly losing future retirement income, but you might even lose your home.

If you don't have an emergency fund, it's time to establish one. And if you do have one, make sure it can completely keep you afloat for about three to nine months -- the longer, the better. That means having enough money accessible to cover everything from housing to food, transportation, utilities, taxes, insurance payments, debt obligations, phone service, and more. Don't keep the money in stocks, either -- recent events have certainly made it clear that the stock market can be volatile. Instead, park it in a safe place, like a savings account at your bank.

Emergency funds are far from exciting, but they can help you sleep better at night. And they can keep you out of all kinds of financial trouble.