Please ensure Javascript is enabled for purposes of website accessibility
Log In Help Join The Motley Fool
Free Article Join Over 1 Million Premium Members And Get More In-Depth Stock Guidance and Research
By Dan Caplinger - Updated May 11, 2020 at 12:35PM

This isn't the first time people have been asked to sell out their Social Security.

Tens of millions of people are out of work and desperately awaiting any financial help they can get. With the full impact of the coronavirus pandemic still not yet known, lawmakers have already offered most Americans $1,200 stimulus checks to help them make ends meet. Many believe that won't come close to meeting the needs of most Americans, however, and that has legislators looking for solutions to get more money out to those hit hardest by the outbreak.

Several proposals for additional stimulus payments are making their way around Washington, varying from one-time payments to ongoing financial support over the next few months or even as long as a year. Yet one of the newest stimulus check proposals would force Americans to accept a trade-off -- and it's one that those who watch the ongoing Social Security debate on Capitol Hill have seen before in different contexts. By inviting desperate Americans to give up Social Security benefits down the road, the proposal will only trade current financial pain for future challenges. 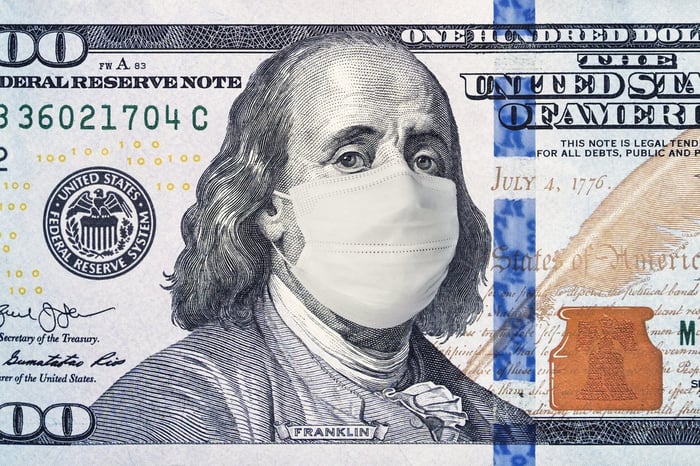 The proposal from policymakers at the Hoover Institute and the American Enterprise Institute is a departure from most of the stimulus packages that we've seen before. The key difference is that rather than simply making a stimulus payment to Americans without asking anything in return, this proposal would have the government extend loans that it would expect Americans to pay back.

Here's how the stimulus loans would work. The government would agree to make a payment in a certain amount, with the authors of the proposal suggesting $5,000 as a possible size. In exchange, borrowers would agree to give up the first few months of their monthly Social Security checks once they became eligible. In the interim, borrowers would pay nominal interest rates of 1% to 1.5%.

The money for the loans would come from the Social Security Trust Funds, with the idea that the interest charged would replace the income that the trust funds' investments would otherwise have produced. That would eliminate the need for further deficit spending to make additional stimulus payments, which the policymakers would prefer to avoid.

Another attempt to divert retirement income

Unfortunately, this isn't the first time that the federal government has considered proposals that would force Americans to choose between their immediate needs and their long-term financial futures. Back in 2017, in response to the student loan crisis, one proposal would have allowed student loan borrowers to have a portion of their loan debt forgiven if they agreed to delay taking their Social Security benefits without getting the usual bump in their monthly Social Security checks that they'd otherwise be entitled to receive. Another proposal would've allowed those seeking family leave benefits to agree to a similar trade-off, again with upfront money coming at the price of some initial Social Security checks.

Proponents of these proposals have noted that they're voluntary, and so no one's being forced into them. If the deal isn't attractive, then you can simply decline. Yet opponents note that the impact of all of these proposals is to reduce the amount of money that people receive in retirement -- at a time when most Americans are already facing a significant shortfall in the amount of savings they'd need to be financially secure after the end of their working careers.

Given the severity of the coronavirus crisis, it's disingenuous to claim that Americans can make truly voluntary decisions about their finances. Millions of people would grasp at a $5,000 lifeline no matter what the future consequences might be, simply because they need the money now. That could lead to a real financial disaster for those people when they retire.

Nevertheless, the stimulus payment proposal to take an early loan from Social Security reflects the growing disagreement among lawmakers about the best way to proceed. Now that the federal government has spent trillions of dollars in support of the economy, we're likely to see more ideas like this that seek alternative funding sources that don't require further deficit spending -- at least not right now.