Please ensure Javascript is enabled for purposes of website accessibility
Log In Help Join The Motley Fool
Free Article Join Over 1 Million Premium Members And Get More In-Depth Stock Guidance and Research
By Maurie Backman – Aug 10, 2020 at 6:04AM

These blunders could wreck your retirement -- and leave you cash-strapped throughout it.

How much do you plan to rely on Social Security in retirement? If you're behind on retirement savings, you'll probably wind up depending on those benefits a lot. As such, you really can't afford to do anything to compromise them. And that's why it's crucial that you avoid the following mistakes.

Hiding income you've earned won't just get you in trouble with the IRS; it could also result in a lower Social Security benefit during retirement. The monthly benefit you're entitled to is calculated based on your earnings during your 35 highest-paid years on the job. Now, let's say that for the latter half of your career, you do some work on the side and opt to get paid in cash to avoid reporting that income. Your motivation might be to save on taxes, but in doing so, you'll also have a lower annual income added to your Social Security earnings record which, in turn, will result in a lower retirement benefit.

A better bet? Report the money you earn. Not only will it help you avoid costly IRS penalties (or other legal repercussions), but it could also help ensure that you have a higher Social Security benefit to look forward to. 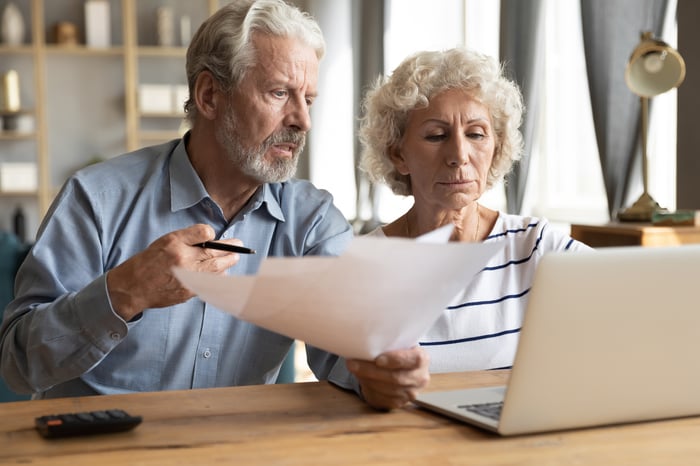 2. Signing up for Social Security as soon as you enroll in Medicare

Medicare eligibility begins at age 65, and you can enroll up to three months before the month of your 65th birthday. But some seniors assume that once they sign up for Medicare, they need to start collecting Social Security as well.

Not so. You're actually not entitled to your full monthly Social Security benefit until you reach full retirement age. Depending on your year of birth, that age is either 66, 67, or 66 and a specific number of months. If you sign up for Social Security at 65, you'll automatically reduce your monthly benefit by anywhere from 6.67% to 13.34%, and that reduction will generally remain in effect for the rest of your life, making it harder to keep up with your living expenses.

A better bet? Sign up for Medicare only at 65 if you don't need your Social Security income yet. Though you're allowed to claim Social Security as early as age 62, signing up prior to full retirement age could leave you cash-strapped later on.

Just as you're allowed to claim Social Security prior to full retirement age, so too can you delay benefits past that point. For each year you do, your benefits go up 8%. But once you turn 70, your Social Security benefits stop growing, and if you delay your filing too long, you'll actually deprive yourself of income that could've been yours.

A better bet? Make a point to sign up for Social Security as soon as you turn 70. If you're late by a few months, not to worry -- the Social Security Administration will pay you up to six months of retroactive benefits, but if you file beyond age 70 1/2, you'll lose out on some of that income for good.

Whether you expect Social Security to play a major role in your retirement finances or a minor one, it's important to get as much as money out of it as possible. Avoid these mistakes, and you stand to come away with a more generous benefit that will serve you well throughout your senior years.