Please ensure Javascript is enabled for purposes of website accessibility
Free Article Join Over 1 Million Premium Members And Get More In-Depth Stock Guidance and Research
By Katie Brockman - Jan 8, 2021 at 6:03AM

Back in the spring, lawmakers passed the CARES Act, which included a stimulus payment of up to $1,200 per person. The new relief bill is similar to the CARES Act in many ways, but there are a few key differences.

If you're currently retired or receiving Social Security benefits, here's what you need to know about the next stimulus check. 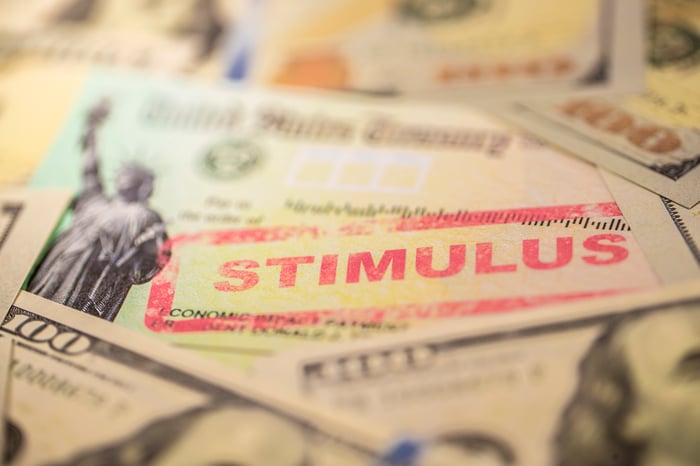 How much could you receive?

At roughly $900 billion, this new relief bill is substantially smaller than the $2.2 trillion CARES Act. How much Americans could expect to receive in stimulus money -- and whether stimulus checks would be included in the relief bill at all -- was a hotly debated topic for months.

Currently, Congress has agreed to stimulus payments of $600 per person, or $1,200 for married couples. In addition, you can also receive an additional $600 for each eligible dependent.

However, there is a slim chance that payments could increase to $2,000 per person. President Trump had initially threatened to veto the relief bill if it didn't include $2,000 stimulus checks, and several other lawmakers are also pushing for larger payments.

On Dec. 28, lawmakers introduced a new bill, the CASH Act, which included $2,000 checks. The bill passed in the House of Representatives, but was blocked in the Senate when Majority Leader Mitch McConnell refused to allow a vote. A new session of Congress will begin on Jan. 3, though, which could potentially breathe new life into the now-dead bill.

The IRS has already begun depositing $600 checks into bank accounts across the country. The good news is that, like under the CARES Act, retirees and Social Security beneficiaries are eligible to receive a second stimulus check -- even if you didn't file 2019 taxes.

However, the income limits that determine exactly how much you'll receive have changed slightly. To receive the full stimulus payment, you must have an adjusted gross income of less than $75,000 per year (for individuals), $112,500 per year (for heads of household), or $150,000 per year (for married couples filing jointly).

These numbers are the same as under the CARES Act. The difference is in the phase-out limits, which is when your payment will be reduced or withheld entirely depending on your income.

With a second stimulus check on the way, most seniors can expect to receive a $600 payment sometime in the next several weeks, if timelines are similar to those under the CARES Act. Although $2,000 checks don't appear likely right now, an extra $600 can still make a difference during retirement.