Don't get stuck with average (or below average!) Social Security checks -- there are multiple ways to increase them, and your future financial security.

Here's the bad news: The average monthly Social Security retirement benefit was recently just $1,559 -- or about $18,700 per year. Chances are, that's not looking like a perfectly sufficient annual income on which to live in retirement. The good news is that you can, and should, supplement that with other income streams, such as retirement accounts, annuities, dividend-paying stocks, and perhaps even a pension, among other things.

And here's even better news: There are plenty of ways to end up collecting significantly more than $1,559 per month. For starters, that's just an average, right? So plenty of people are earning more than that. Here are three ways to beat that average. 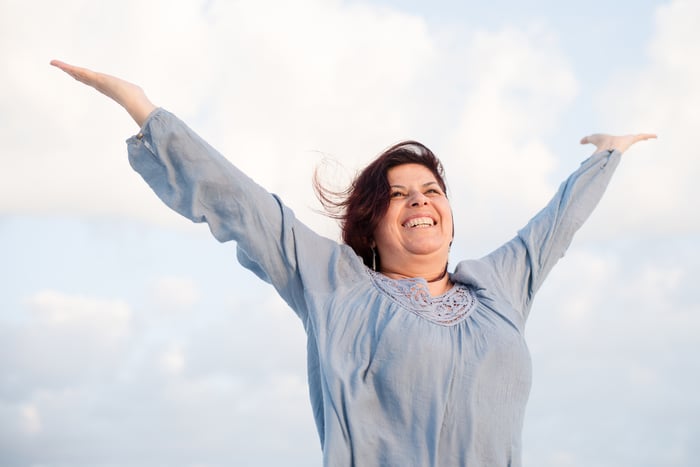 This is likely the most obvious one: Earn more. Your Social Security benefits are based on your earnings over your working life. Specifically, they're based on what you earned (adjusted for inflation) in the 35 years in which you earned the most. So... it's well worth working at least 35 years, if you can, so that no zeroes are factored into the calculation, resulting in benefit checks that are lower than they could be.

Here's another trick: If you're earning significantly more now than you've earned in the past (again, adjusted for inflation), for every year beyond the 35th year that you work you'll be kicking out your lowest-earning year and replacing it with a relatively high-earning year -- which will beef up your benefits.

If you're not earning that much more than you have in the past, you can, in the words of Star Trek's Captain Picard, "make it so." Juice your earnings for a few years or a lot of years by taking on a side gig or two. Think about ways you could generate more income that seem at least a little appealing. Maybe drive for a ride-sharing service on the weekends? Rent out your home or apartment now and then? Make and sell things online -- like jewelry, crocheted items, candles, photographs, etc.? Do some freelance or contractor work? There are many possibilities.

Here's another trick: Delay starting to collect your Social Security benefits -- if you can. (Not everyone can -- many of us end up out of the workforce earlier than planned due to factors beyond our control.) You can start collecting benefits as early as age 62 and as late as age 70. Most of us have a "full retirement age" at which we can start collecting the full benefits to which we're entitled based on our earnings history, and yours is most likely 66 or 67. For every year beyond your full retirement age that you delay starting to collect, your benefits will increase by about 8%. So delaying from age 67 to age 70 will increase your checks by about 24%.

That may sound amazing, but remember that if you started on time or early, you'd get many more checks. The system is designed to deliver roughly the same total benefits no matter when you start collecting, if you live an average-length life. Still, delaying is a powerful strategy for those who expect or hope to live a longer-than-average life.

Finally, there's a strategy that I phrased mostly in jest: Marry a high earner. That's not the best reason to marry someone. But if you have married someone who has earned much more than you over their working life, that can benefit you in the eyes of Social Security. For one thing, when you're both receiving benefits, they will be more sizable due to your spouse's bigger checks.

If your partner dies before you, your household will go from two Social Security checks to just one -- but you won't be stuck with your smaller one. You're allowed to start receiving the larger of the two from that point on. So that's another way to end up with bigger checks.

There's a lot to learn and know about Social Security, and it's worth boning up on it at least a little, as you might discover other ways to increase your benefits or otherwise get more out of the valuable program.