Not everyone can get that big payout, but there are still ways to beef up your benefits significantly.

The average monthly Social Security retirement benefit was recently $1,560 -- or about $18,720 per year. If you're thinking that's far from the income you'll need and want in retirement, you're not alone.

Fortunately, that's just the average, and millions of beneficiaries collect more than that -- though often not that much more. For those retiring in 2021, the maximum monthly benefit is $3,895 -- going up to $4,194 for 2022. Here's a look at how you might get that maximum payout, and what to do if you can't. 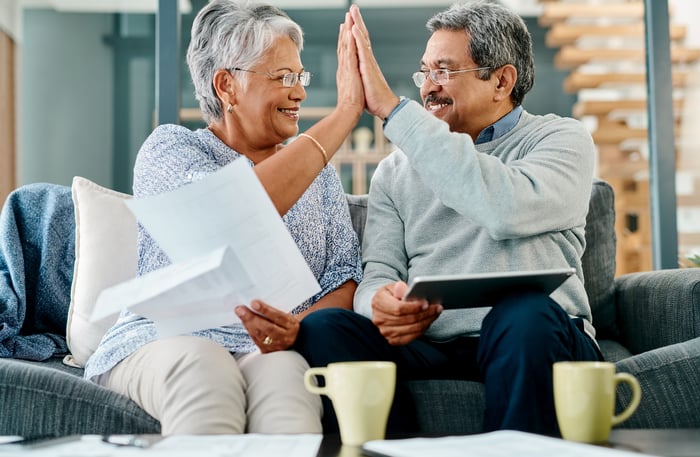 For starters, aim to work for at least 35 years, because the formula used to determine your benefits is based on the (inflation-adjusted) income you earned in the 35 years in which you earned the most. So if you have only worked for, say, 30 years when you retire and start collecting Social Security, the formula will be inserting five zeroes into the calculation.

To achieve that maximum payout, per the Social Security benefit formula, you'll also need to earn the maximum amount that counts toward your benefits in each of the 35 years. For 2021, that wage base limit is $142,800, and for 2022, it will be $147,000. You can look up past limits at the Social Security Administration website to see whether you met or surpassed them in all of your working years. (The sad truth is that most of us will fall woefully short of that limit in most or all of our working years, but knowing its importance to the benefits calculation can be motivating.)

Let's assume that you've worked for 35 years, are retiring in 2021, and have earned the maximum salary that counts toward your benefits. There's one more step before qualifying for that maximum $3,895 payout. You must have also delayed collecting your benefits -- until age 70. Each of us has a full retirement age at which we're able to start collecting the full benefits to which we're entitled, based on our earnings history. Depending on when you were born, it's age 66, 67, or somewhere in between.

You can start collecting as early as age 62, though collecting earlier than your full retirement age means your checks will be smaller. On the opposite end of the spectrum, you can delay beyond your full retirement age, boosting your benefit checks by about 8% for each year that you delay. So to maximize your benefits, you'd need to delay until age 70 -- at which point, it stops being beneficial to delay any further.

That can seem a smart thing to do regardless of whether you'll achieve the maximum payout, and for many people it is. But if many of your relatives have lived shorter-than-average lives, or you're in poor health, you might be better off turning on the Social Security spigot at your full retirement age or sooner. Remember, while your checks will be smaller, you'll get many more of them.

The three steps above are what you need to do to get that $3,895 payout. If you can't do them all, fret not. Relatively few people qualify for that maximum. You can still take steps to increase your Social Security benefits -- such as working for at least 35 years. Indeed, if you're making more now than ever (on an inflation-adjusted basis), you might even work a few more years, as each high-earning year beyond 35 will kick out your lowest-earning year from the formula.

You can try to earn more by climbing your career ladder, and even just by taking on some side gigs. If, for example, you tutor kids, sell sweaters you knit online, or drive for a ridesharing service and make $150 per week, that's nearly $8,000 in additional earnings per year.

So don't despair if you can't collect that $3,895 per month. That doesn't mean you'll be stuck with the $1,560 average benefit, or less. Take some time to learn more about Social Security and about how you might beef up your benefits and get more out of the program. You'll thank yourself for doing so.

Be sure you're saving and investing for retirement on your own, too -- via tax-advantaged plans such as IRAs and/or 401(k)s, or just in regular brokerage accounts. Most of us will probably not want to live on just Social Security income, even if we do increase the size of our benefit checks.