Please ensure Javascript is enabled for purposes of website accessibility
Log In Help Join The Motley Fool
Free Article Join Over 1 Million Premium Members And Get More In-Depth Stock Guidance and Research
By Matthew Frankel, CFP® - Updated Dec 3, 2018 at 11:06AM

A Roth 401(k) could be an excellent choice if you want to avoid paying taxes in retirement.

A Roth 401(k) can help you manage your tax liability in retirement. Photo source: www.stockmonkeys.com.

If your employer offers a retirement plan, there is more than a 50-50 chance that a Roth 401(k) is among your options for savings. While Roth 401(k) plans have become increasingly available in recent years, many people still do not have a clear understanding of this type of account and its benefits, and as a result they have not been widely adopted by investors. With that in mind, the Roth 401(k) has some specific benefits, so here's an overview to help you determine if it could be a good fit for you.

What is a Roth 401(k), and how is it different from traditional 401(k) plans?
In many ways, a Roth 401(k) is similar to a traditional 401(k) retirement plan. Both accounts allow you to withhold from your paycheck money that can be invested in an assortment of mutual funds. Both account types also allow your money to compound until you retire, and permit retirement withdrawals anytime after age 59 1/2.

The major difference between a Roth 401(k) and the traditional version is the tax treatment.

However, the long-term effect is that you'll have more usable money once you reach retirement. Contributions of $5,000 per year for 35 years could grow to more than $744,000, assuming 7% average annual investment returns. However, with a Roth account, you would effectively end up with more money, since you could literally withdraw the entire amount without paying a penny in taxes. And if you're in a higher tax bracket by the time you retire, paying more now could work in your favor.

Basically, it boils down to when you'd rather pay taxes -- now or after you retire.

Both account types allow for elective contributions of up to $18,000 for the 2015 tax year ($24,000 if you're over 50), and allow your investments to compound year after year without you worrying about capital gains or dividend taxes. Both accounts also allow your employer to match a certain amount of your contributions, although all matching contributions are made on a pre-tax basis. That means if you choose a Roth 401(k), your employer's portion of the contributions will still be placed into a traditional 401(k).

As I briefly mentioned already, one big reason is to "lock in" your current tax bracket, which could be particularly advantageous for young investors. Over the course of your career, you can generally expect your income to rise, and your tax bracket to rise with it. If you anticipate your tax bracket to be higher in retirement than it is now, contributing to a Roth 401(k) could work out to your advantage.

Additionally, nobody knows what the federal income tax rates will be by the time you're ready to retire. A federal income tax rate of say, 50%, may seem unlikely, but is entirely possible -- in fact, the highest tax bracket didn't drop below 70% until 1982. By contributing to a Roth 401(k) you eliminate the risk of taxes rising. 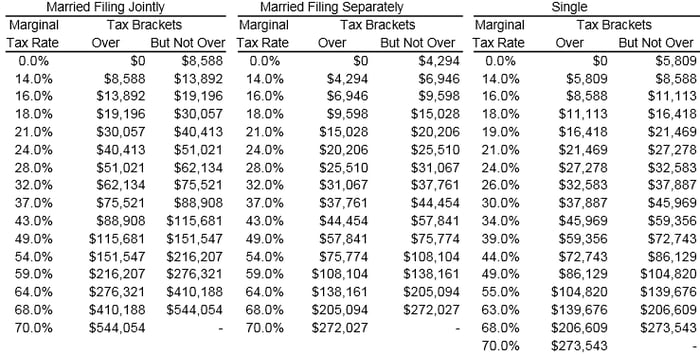 The actual 1981 U.S. tax brackets, with dollar amounts adjusted for inflation. If the tax structure looks like this when you retire, you'll be glad you chose a Roth 401(k).

This is particularly important if you have a traditional IRA or other retirement accounts that will be subject to taxation in retirement. When investing, it's a good idea to diversify, and that includes your tax strategy. In other words, you don't want to bet your entire retirement nest egg that you'll be in a favorable tax bracket once you retire.

As Roth 401(k) accounts don't have required minimum distributions, they are excellent choices for investors who might not need the money in their account to live on in retirement, or who may want to pass on their savings to their heirs or spouse.

Employees are choosing the Roth 401(k), slowly but surely
According to data from Aon Hewitt, approximately half of all U.S. employers offer a Roth 401(k) option to their employees. But among that group of employers, few employees are taking advantage of the resource.

Younger workers in particular recognize the benefits of a Roth 401(k), as the 20-29 age group has the highest participation rate, at 17.2%. This is in stark contrast to older workers, as less than 9% of workers over 50 chose a Roth 401(k) when it was offered.

A good option for your retirement savings
During your next open enrollment period, it could be a good idea to check whether your employer offers a Roth 401(k) option. A Roth 401(k) is a great way to lock in your current tax rate and enjoy years of tax-free growth of your nest egg, while giving you the flexibility to use your savings, or not, when you reach retirement age.