The latest information is in. And it shows half of Americans haven't saved enough to retire with what they need. But there's good news; it also shows there's still time, and reveals exactly how much of their money people need to save to retire comfortably.

The major risk
The Center for Retirement Research at Boston College recently released its latest study titled "How Much Should People Save?" It examined not only how much people need to save to retire comfortably, but also how well Americans are doing to meet that goal.

Troublingly, the study found, "half of today's working families are 'at risk' of not being able to maintain their standard of living once they retire." 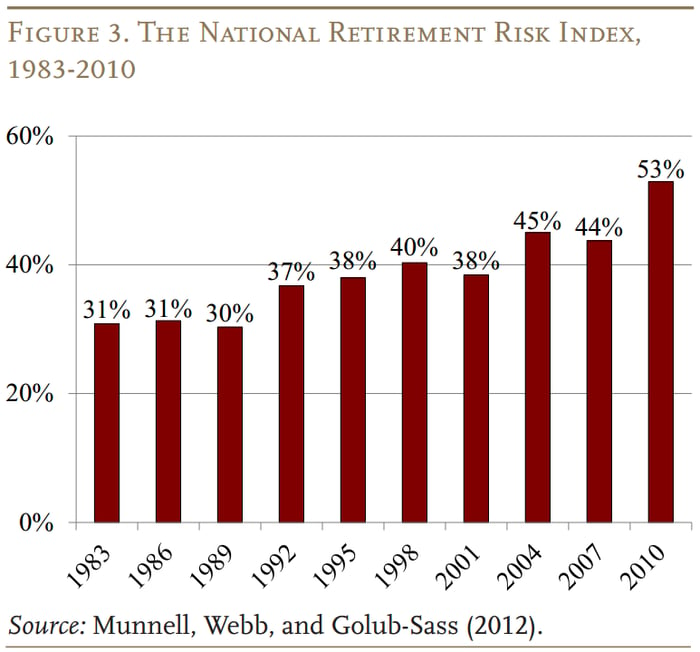 The National Retirement Risk Index (NRRI) spans across a variety of factors, but in short, it takes the data from the Federal Reserve's Survey of Consumer Finances measuring how much people have saved up through personal and employer-sponsored retirement plans, home ownership, and more.

It then takes their current income and standard of living to determine how much support they will receive from the government through Social Security when they retire, and then gauges how much they will need out of their own pockets in retirement to maintain 70% their standard of living.

Those who fall more than 10% short of the necessary savings in order to meet those goals are designated as being at risk. And as you see, that number has continued to grow as employers are contributing less to sponsored retirement plans, the American economy slowly recovers from the financial crisis, and more generally, people are saving less than prior generations.

And while the growing numbers are troubling, the study also revealed there is thankfully still time for millions to make up lost ground. 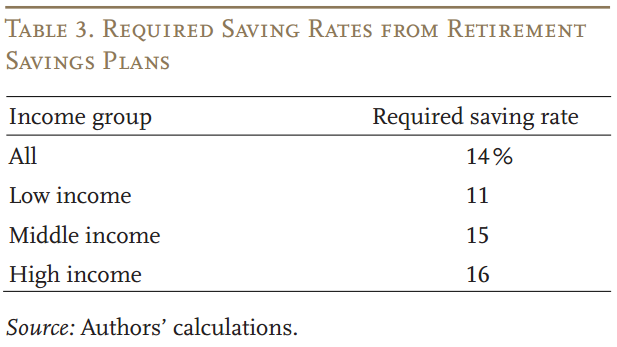 The amount we need to save
As shown in the chart to the right, beginning at age 35, Americans need to save about 15% of what they make, in order to have a sustainable source of income through an annuity when they retire.

It's also important to point out the study also assumes the savings will earn a real return of 4% -- which is the return after inflation -- meaning it's not just parking the money into a bank account, but also patiently investing as well. But it must be noted, from 1982 to 2012, the S&P 500 delivered a real-return of nearly 6% even after factoring fees, inflation, and taxes, so the 4% return would even be considered conservative.

But one of the most fascinating things the study found was the massive benefits of saving earlier and retiring later: 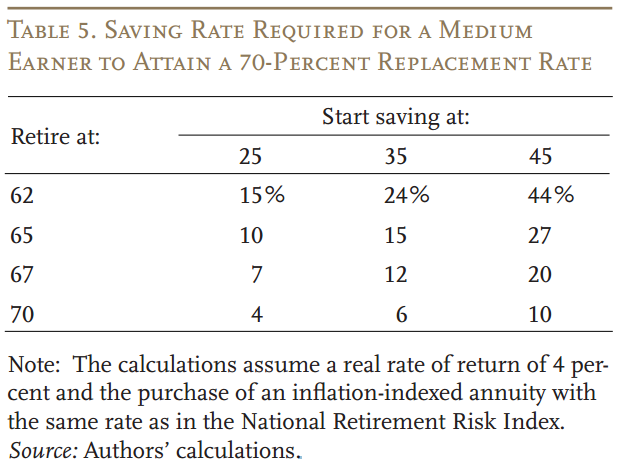 As you can see, just eight years of difference in terms of retirement age can have a monumental effect on savings. In addition, there are incredible benefits of saving sooner rather than later.

Just as Warren Buffett said, "someone's sitting in the shade today because someone planted a tree a long time ago," we must see time is a critical factor for both saving and investing well.

Looking ahead
At times, it's easy to convince ourselves that we have plenty of time to comfortably save for retirement and don't need to think about it today. But no matter where you find yourself today, it's critical to know what a monumental difference just a few years can make when it comes to starting both saving for and beginning retirement.

Surprisingly, This Is How Much Money Americans Need to Save for Retirement @themotleyfool #stocks Next Article
Current