Retirement is supposed to be a period of joy and relaxation for our nation's senior citizens, but these seven monumental financial challenges are spoiling that dream for some seniors.

Retirement is supposed to be a period of joy for senior citizens where they're able to travel, reflect, and sometimes just put their feet up if they choose to do so. Unfortunately, far too many senior citizens are finding themselves denied of the American dream of retiring comfortably and on their own terms.

Based on a study conducted by Bankrate in 2014, more than a third of all working adults had failed to save a cent toward their retirement. This rate was particularly high among millennials, but even among those aged 65 and up, 14% reported no retirement savings! In other words, if the data from this study carries over into the broader population, one-in-seven seniors has no retirement savings whatsoever. 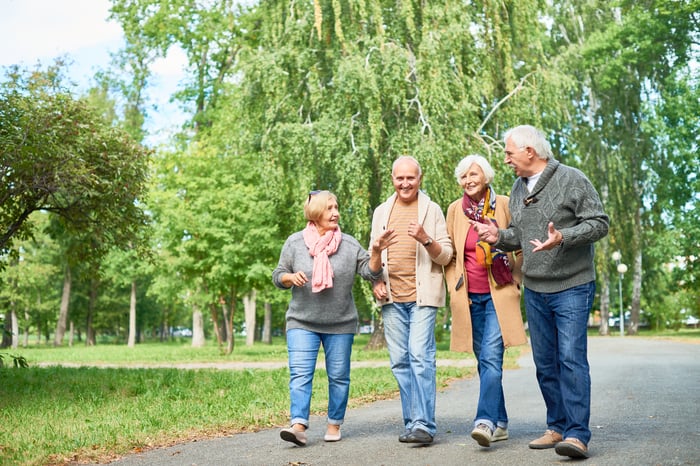 This is a problem -- and it's being compounded by a handful of major challenges that many senior citizens are currently facing. Let's briefly run through the seven biggest financial challenges facing seniors, in no particular order, and then afterward we'll offer a few suggestions aimed at boosting income in retirement.

Seniors: take back your retirement
Unless you have a DeLorean with a flux capacitor handy, you can't change the past a la Back to the Future. However, that doesn't mean senior citizens are out of options when it comes to improving their retirement outlook, even if they're already retired.

First, it's imperative that seniors understand the many ins and outs of the Social Security program. For example, the ability for couples to use the File as a Spouse First strategy allows one spouse to collect spousal benefits while his or her benefits are suspended and allowed to grow. Over the long run, the combined income generated for the couple could be greater than if they'd simply claimed their own benefits. This is just one of many examples of how seniors can boost their Social Security income by becoming familiar with the program and their options.

Another important point is senior citizens have to be willing to invest some portion of their nest egg in the stock market. While investing a huge percentage of their wealth in the stock market may not be prudent, it's one of the few investment vehicles that regularly outperformed inflation over the long run. With seniors living longer than ever these days, they'll need their nest egg to stretch further than ever. When in doubt, seniors can always turn to index funds or electronic-traded funds, or ETFs, if they want to avoid the rigors of individual stock picking.

Working longer is obviously an option, although finding meaningful work, as was discussed above, can be difficult. If you do land a job you might be best served utilizing the money to help pay down what remaining debts you have, and/or using this money to purchase supplemental health insurance that will help cover medical treatment expenses not covered by Medicare.

Finally, it's important that you realize this is your retirement, and your kids and dependents need to understand that. Your kids and grandkids can take out loans against their home, car, or college education, but you can't take a loan out against your retirement. Saying no to financially helping out a family member or dependent may not be fun, but it's the financially smart thing to do if you haven't adequately saved for your retirement.