Millions of Americans rely on government programs to help provide them with essential healthcare, and both Medicaid and Medicare play key roles in covering healthcare costs. Despite their sharing the first six letters of their names, though, comparing Medicaid versus Medicare shows just how different the two programs really are. Let's take a closer look at the key differences between Medicaid and Medicare to give you a better sense of whether you qualify for either or both of the programs. 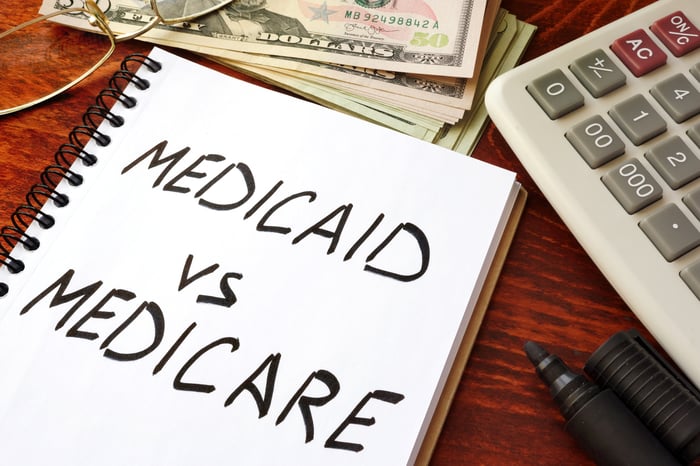 The primary difference between Medicaid and Medicare is in who's eligible for each program. Medicare is health insurance for anyone with a qualifying work history who's 65 or older, as well as certain younger people with certain disabilities or end-stage renal disease. Your income and financial assets are irrelevant for qualifying for Medicare. As long as you worked for 10 years at a job in which you paid Medicare taxes, you'll generally qualify. Alternatively, if you're married and your spouse fulfilled the 10-year work requirement, then you can usually receive Medicare benefits.

By contrast, Medicaid is specifically designed to help cover medical costs for people with limited income and financial resources. If you have financial needs, Medicaid covers a wide variety of people, including not only those who are 65 or older or living with a disability but also children under 19, parents, or other adults caring for a child, and even adults without dependent children in some locations. As a result, some of those who qualify for Medicaid won't qualify for Medicare and vice versa.

2. Medicaid covers some services that Medicare typically doesn't.
Both Medicaid and Medicare cover many different types of healthcare costs, including doctor visits, hospital stays, and necessary prescription drugs and medications. The way in which each program provides coverage is slightly different, though, with Medicare divided into Part A for hospital services, Part B for medical services like doctor visits, and Part D for prescription drug costs. Medicaid typically covers all of those areas in a single program, similar to the consolidated approach that Part C Medicare Advantage plans use.

Medicaid, however, goes beyond Medicare's coverage in a couple of key areas. The most important is in the area of long-term healthcare services and support. Medicare provides limited coverage for long-term care, with most benefits confined to skilled nursing facilities for a relatively short period of time. Medicaid, on the other hand, can cover the cost of nursing homes, assisted living facilities, and other long-term care alternatives as long as they're deemed medically necessary.

3. Medicaid has a state component, while Medicare is entirely federal.
Administratively, the biggest difference between Medicaid and Medicare is that states govern a lot of what Medicaid covers, while the federal government runs Medicare. As a result, people who are eligible for Medicaid in one state might not qualify in another, and the types of medical services they would receive under Medicaid could be substantially different from place to place even if they do qualify.

Technically, Medicaid is a joint federal and state program, and the funding that the federal government contributes comes with strings attached that require states to provide certain benefits. The optional benefits that states add, though, can vary greatly, so it's important for those who might be eligible for Medicaid to look closely at their state's program to see what it will cover.

4. Some people are eligible both for Medicaid and Medicare.
Medicare is designed to cover only a portion of healthcare costs, and so those who have financial challenges can sometimes get coverage under both Medicare and Medicaid. So-called "dual eligible" recipients can get assistance with some of the premium and copayment costs that Medicare charges, and Medicaid can fill in gaps that Medicare won't cover.

Understanding the differences between Medicaid and Medicare can point you in the right direction to get the healthcare benefits you need. The two programs are different, but both have the goal of providing healthcare to those who qualify.