Figuring out how much you'll get from Social Security is a lot more complicated than you'd think.

The most important piece of information for Americans planning their retirement is how much they can expect from Social Security. Yet what you'd think should be a simple question to answer is actually far more complicated than you'd think, and many people don't understand why Social Security isn't a lot easier to understand.

To plan well for your financial life after the end of your career, you need to know what Social Security will provide. With that in mind, let's look at the simple question of how much you can expect from your Social Security benefits and why the answer doesn't match up with what many Americans expect for their retirement income.

There's a complication with using this strategy, however. If you measure benefits by total tax paid into the system, then it gives those who had their highest-earnings year toward the end of their careers a dramatic advantage over those who earned more of their wages earlier in their careers. To allow people to compare apples to apples in terms of when during their lifetimes they chose to work, the Social Security Administration uses formulas that reflect the impact that wage inflation has had over time. So for instance, in considering how much credit to give someone who had a job when wages were generally about 10% of what they are today, the SSA might apply an inflation factor that roughly multiplies those earlier wages by 10 to make the figure comparable to earnings today.

That said, if the SSA wanted to, it could still make Social Security benefits directly proportional to wages or taxes paid after making appropriate adjustments for inflation. After all, the taxes you paid early in your career were also affected by inflation, with every dollar in taxes taking away more purchasing power than a dollar of taxes taken today.

The major Social Security policy that adds so much confusion
Social Security has chosen not to take the simple route, with an overarching policy goal explaining why benefits aren't directly proportional to a worker's average earnings. Because Social Security is what's known as a social insurance program, one of its missions is to ensure a subsistence-level retirement payment for workers. To make sure that those with relatively low lifetime earnings get enough in benefits to get by, the SSA has implemented a tiered schedule of benefits that gives low-income and middle-income recipients a greater percentage of their career income back than it does high-income workers.

The benefit schedule is also unnecessarily confusing, with the choices for what are known as benefit "bend points" seeming completely arbitrary. For 2015, Social Security recipients get $0.90 in their monthly Social Security checks for every $1 of the first $826 of average indexed monthly earnings. Above $826, however, you only get $0.32 for every additional $1 in average earnings up to $4,980. An additional bend point further limits raises in benefits to $0.15 for every $1 above that $4,980 amount. Different amounts apply for those who reach age 62 in years other than 2015, but the same general idea prevails. 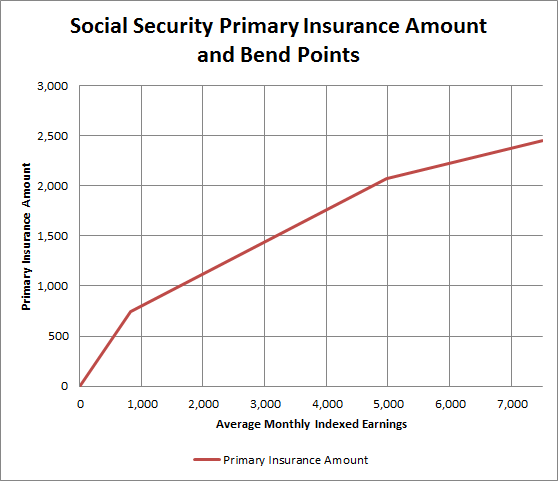 Image: Author based on SSA data.

The impact of this system can be bigger than you'd think. Someone with average monthly earnings of $1,000, for example, would get a check of almost $800 per month if they took benefits at full retirement age. A worker who earned an average of $3,000 would qualify for $1,440 in monthly benefits if they waited until full retirement age. In other words, even if you earned triple the average earnings, you only get an 80% boost in benefits. The effect gets even more magnified at the highest earnings levels, with someone bringing in an average of $9,000 in monthly earnings getting $2,675 per month from Social Security.

Social Security confuses a lot of people, and one reason is that it isn't just designed to pay out what it pulls in. With its goal of providing social insurance, Social Security benefits take some digging into before you can be comfortable with what your benefit will be.