Please ensure Javascript is enabled for purposes of website accessibility
Log In Help Join The Motley Fool
Free Article Join Over 1 Million Premium Members And Get More In-Depth Stock Guidance and Research
By Sean Williams, Selena Maranjian, and Dan Caplinger - Sep 21, 2015 at 8:18AM

If you don't understand these sometimes subtle differences between Medicare and Medicare Advantage, it could come back to haunt you.

In terms of entitlement programs, Medicare ranks right next to Social Security in importance for senior citizens. Although it's not solely for the elderly, as of 2013 some 55 million people (mostly seniors ages 65 and up) qualified for Medicare benefits. These benefits primarily help ensure that seniors have access to affordable medical care as they age.

However, Medicare isn't exactly a cut-and-dry program anymore. People who qualify for Medicare now have a choice between original Medicare and the relatively newer Medicare Advantage plans. If you aren't familiar with the sometimes subtle differences between these two plans, it could wind up biting you in the pocketbook.

With this in mind, we asked three of our Foolish contributors to name one key difference between Medicare and Medicare Advantage that Medicare beneficiaries and those in the workforce who may be nearing Medicare eligibility should understand. Here's what they had to say. 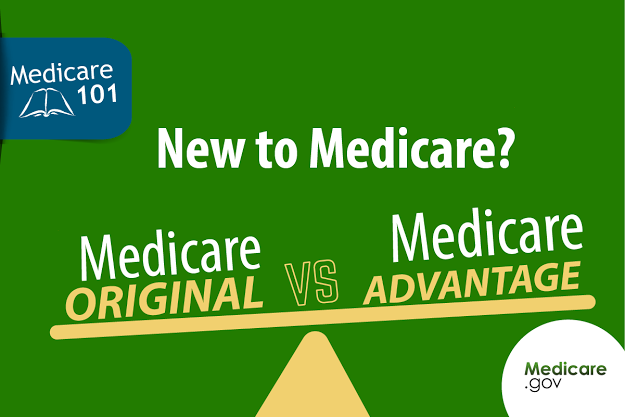 Medicare Advantage plans debuted in 1995 in order to offer Americans of a certain age (those 65 and older) more options than just Medicare. The plans are offered and administered by private companies (typically health maintenance organizations (HMOs) or preferred provider organizations (PPOs)), but the federal government regulates them. A Medicare Advantage plan must offer at least as much coverage as Medicare (i.e., Part A and Part B benefits, respectively covering hospital and medical services), but it will often sport more than that, such as vision and/or dental care, in order to attract customers. The extras it offers can be in the form of lower copayments for services or broader coverage. Most include prescription drug coverage, too.

Choosing between Medicare and a Medicare Advantage plan isn't a permanent decision. At least once a year, you will be able to switch between them.

Sean Williams
Perhaps the biggest difference between original Medicare and Medicare Advantage plans is what you will or could wind up paying for medical care.

Traditional Medicare covers Part A (your hospital insurance) and Part B (physician and outpatient visits and services). Typically Part A does not have a monthly premium attached, however eligible Medicare beneficiaries will pay a premium on Part B (which could go up depending on your income). Now here's the catch: traditional Medicare has no out-of-pocket spending limits. This means Medicare will foot 80% of the expense of your approved services, but you'll be responsible for coming up with the remainder, regardless of cost.

Seniors should examine both pathways to decide which one works best with their needs, but it really comes down to original Medicare offering cheaper premiums, and Medicare Advantage plans giving members peace of mind.

Finally, initial enrollment periods differ for the two programs. The general enrollment period for Medicare Part B goes from January 1 to March 31, but the typical time to sign up for Medicare Advantage when you first get Medicare is April 1 to June 30. Keeping track of these timeframes is important to avoid penalties and make sure you have the coverage you want.