Over the weekend, headlines abounded about how the Dow Jones Industrials (DJINDICES:^DJI) and S&P 500 (SNPINDEX:^GSPC) had their worst-ever start to a year last week. In the face of near-hysteria, many investors could use some perspective to put last week's drop into broader context. Below, you'll find a list of 11 simple reasons not to panic about the stock market's losses.

1. In the long run, a 6% drop is just a blip. Take a look at the chart below to get a sense of just how insignificant the decline the stock market suffered last week is in the context of its longer-term performance. It barely registers. 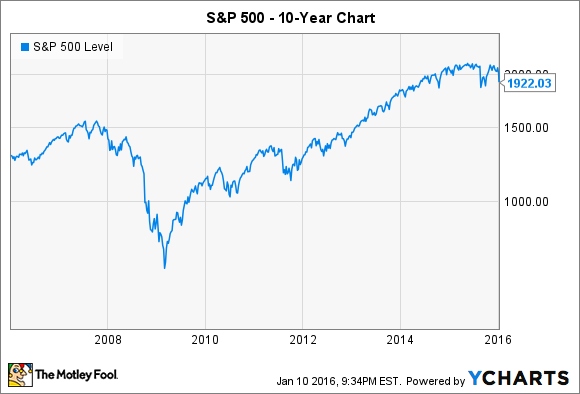 2. Declines like this happen all the time. On average throughout history, 10% declines in the markets have happened about every 11 months. Yet the stock market has continued its inexorable march upward over the decades.

3. Markets recover -- often quickly. The same panicked reactions happened last August, when a similar event in China sent U.S. stocks down more than 10%. By November, the S&P had recovered back to where it had traded before the drop. You won't always see such a kneejerk reaction, but historically, even the largest market crashes have eventually given way to new all-time records for the Dow and S&P.

4. Falling markets make future gains more likely. Overall, based on stock market history, the odds that the S&P 500 will be lower five years from now are about 20%, or one out of five. After even just a 5% drop, the odds of losing money decline, making it a better time to invest rather than a worse time.

5. The market's best days have historically followed substantial drops. In 2015, both the Dow's best day and the S&P 500's best day came in the aftermath of the August decline. Those who panic-sold after the declines missed out -- and likely didn't manage to get their money back into the market until after stocks had recovered even further.

6. Calendar-driven thinking is irrational. One big reason why the market's drop is getting so much attention is that it's coming at the beginning of the year. It's another example of how too great a focus on annual performance can distort investor perception. The fundamental prospects for companies aren't tied to the calendar year, so your expectations about stock-price movements shouldn't be either.

7. The market first hit this level in May 2014. Even after the decline, the stock market has only given up gains from about a year and a half. From 2009 to mid-2014, the S&P 500 nearly tripled. Overall, markets typically haven't tripled even over seven-year periods.

8. The best-performing stocks have routinely undergone big losses along the way. Look at the top-returning stocks over the past decade, and you'll find plenty of times when shares traded well below their best levels. To get truly large returns, you have to be willing to wait through large pullbacks.

9. In the long run, stock returns go positive. There's been no 20-year period in which stocks have lost money. That's true even when you consider the impact of inflation on stock market returns.

10. You don't have to time the market to be a successful investor. Strategies like dollar-cost averaging let you ease into the market, taking advantage of downturns to buy more shares on the cheap while also letting you get even better bargains in the future if the market keeps falling.

11. There are stocks that you've wanted to buy for a long time. For years, investors have watched share prices go through the roof, making them too nervous to buy. Now, those shares are on sale. What are you waiting for?

It's easy to panic when the stock market goes down, especially when you see headlines everywhere telling you that you should. The best way to win at long-term investing is to embrace the counterarguments to that way of thinking. A long-term approach will serve you well as long as you have the time horizon and the discipline to stick it out.