Please ensure Javascript is enabled for purposes of website accessibility
Log In Help Join The Motley Fool
Free Article Join Over 1 Million Premium Members And Get More In-Depth Stock Guidance and Research
By Brian Stoffel - Feb 22, 2016 at 6:03AM

The average American's readiness for retirement depends largely on a retiree's expectations.

Boiling the average American household's retirement savings down to just a few numbers -- and giving it meaning -- is a difficult thing to do. That's what I've discovered after writing about, reading, and talking with retirees from all walks of life for a number of years. Some couples feel the need to save up over $1 million to comfortably sleep at night, while others know that they'll survive, and thrive, just fine on Social Security alone.

That wide range in mind-sets is critically important, because two people can look at the numbers I'm going to present and come to completely different conclusions. Whereas some will see an alarming situation that needs to be fixed immediately, others won't understand what the big deal is. The conclusion that you, dear Fool, draw, probably speaks to your own frame of reference more than anything else.

The view from 30,000 feet
Last June, the Government Accountability Office released a detailed report on, among other things, the current financial status of households between the ages of 55 and 64. The main goal was to measure the retirement savings for this group. Here's the distribution that researchers found. 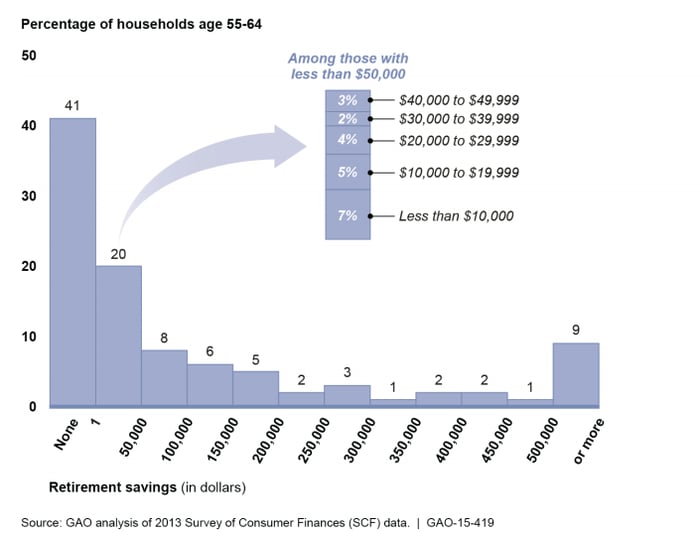 This means the median household approaching retirement has a nest egg of between $10,000 and $20,000. This number is drawn down significantly because 41% of these households have no retirement savings whatsoever.

Zooming in on this 41% subgroup
That doesn't necessarily mean these retirees will have nothing to provide income in retirement. Consider:

The average yearly income for this subgroup clocks in at $26,000 -- and the average Social Security retirement benefit provided to all Americans who receive it currently at $16,100. Technically, the program could replace over 50% of the income from this group, but the benefits this group receives are probably lower because of lower lifetime earnings.

It's also important to note, however, that this represents the average check per person receiving a benefit; if a household has two former workers, or one receiving spousal benefits, it could be higher.

The 59% who have saved
The financial situation of this group was a much wider range, with 7% having less than $10,000 and 9% have more than a half-million dollars. Of this group:

Here's how it all shook out. 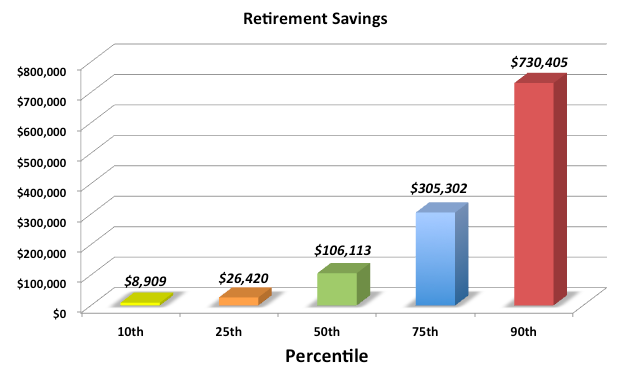 Source: GAO. All figures were converted into 2016 dollars using the Bureau of Labor Statistics

All of these figures represent the financial situation of millions of households -- all with different values, native cultures, needs, and wants. The importance of one's nest egg, therefore, will hold a different level of importance as well.

I suggest all readers carefully consider how important their nest egg is to them. In the end, there's no harm that can be done by sitting down for a half-hour and plotting out a rough idea for the type of retirement you think you'll be looking at down the road.