Believe it or not, over half have no nest egg at all!

The life satisfaction of retirees includes much more than just their nest egg balance .

I spend half of my year with my wife and two-year old daughter in rural Costa Rica. We live and volunteer on a permaculture coffee farm. Our life there is a nice byproduct of being able to work via the Internet.

One person we've gotten to know well there is a woman I'll call Dona Maria. At 90 years old, she's the great-grandmother of our neighbors' family. She lives with one of her children, two of her grandchildren, and four of her great-grandchildren.

By typical American standards, we'd say that she's deeply impoverished -- and would (paternalistically) describe her situation as tragic. But you wouldn't think that if you talked to her, or saw how she lives her life. Up at the crack of dawn to milk the family cow, spending a copious amounts of time with neighbors, friends and great-grandchildren, and moving about her house with ease, she's the very model of happiness in old age.

Why do I tell that story? Because based on the numbers I'm going to present below, it would be easy to conclude that the vast majority of our retirees are living on the razor's edge of a deeply depressing life.

While that may be true for some of them, it certainly isn't for all. And that's important to remember when you consider...

More than 50% have no nest egg at all!
A study released last year by the Government Accountability Office (GAO) gave more detail than any other source I've found about the financial situation of today's retired population. Specifically, the GAO provided details on people ages 65 to 74 -- the group I'll be referring to hereafter when I talk about those who are retired.

What stood out more than anything else was a simple fact: 52% of households in this group have absolutely no retirement savings whatsoever.

That's not to say that they don't have any assets or income: 77% own their homes (and 36% have paid off their mortgages), 49% have some sort of defined benefit (i.e. pension) plan , and almost all receive some sort of Social Security payment.

But to get a clearer picture, let's look at the average nest egg by percentiles among savers. 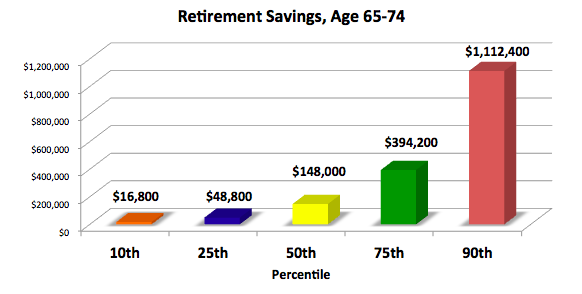 Based on this data, only the top quarter of all savers -- and only the top 12% of all retirees in this age range -- can count on a minimum of $16,000 in income each year from their nest eggs. Now, add in pensions, Social Security and other common sources, and their incomes could easily add up to more than $35,000 per year -- an amount you could manage on reasonably comfortably if you owned your home outright.

So where's the money coming from?
The GAO offered an even clearer visualization as to how where the money's coming from to allow these groups to afford their respective lifestyles. The answer: It certainly isn't coming from their nest eggs!

As you can see, nothing does more to help retirees meet their needs than Social Security. Overall, it provides a whopping 44% of all income for those aged 65 to 74. Even among those who have built up their nest eggs, the money they've saved and invested only provides a scant 9% of their retirement income.

Here's a twist, though: The defined benefit plans that provide 17% of current retirees' income are far less commonly offered to today's workers. And with almost 20% of their retirement incomes coming from wages or salaries, it's a bit harder to consider today's retirees truly "retired."

Put it all together and there are four conclusions I believe we can draw: