With your financial future largely in your own hands, how much should you be saving every year? It's a critical question, because if you get it wrong, your retirement might be a struggle.

Just about everyone knows how important it is to save and invest for retirement. After all, pensions are increasingly a thing of the past for most of us, and few of us are independently wealthy. Thus, more than ever, our future financial health is largely in our own hands. A critical question lingers in many people's minds, though: just how much money to save every year. Here are three responses to that question.

Brian Feroldi: I'm a passionate believer in pushing yourself hard to get your savings rate as high as possible, but I realize everyone is in a different financial situation. Despite that, with the exception of the most dire financial positions, I think everybody should at least contribute enough to their 401(k) or 403(b) account to maximize any available employer matching funds. Otherwise, you're voluntarily saying "no" to free money.

Many employers that offer a 401(k) plan have a matching program in place. While the rules vary from company to company, one common setup is that the employer matches half of the first 6% of an employee's contribution. That means if an employee elects to contribute 6% of her salary to the plan, then the company will add in another 3%.

You might think 3% is kind of puny, but since the typical American family earned $53,657 in 2014, a bump like that adds an extra $1,609 to the employee's nest egg each year. That's certainly not chump change!

Thankfully, a recently published report by Vanguard showed that the majority of Americans are not forgoing this free money. The total plan participation rate was 77% in 2014, and the average employee's elected deferral rate was 6.9%. However, when you add in the "free" money employers were kicking in, the average jumped to 10.4% -- a solid 3.5% bump!

That's great to see, but if you're in the 23% that chose not to contribute at all, I'd suggest you march on down to your company's HR department and sign up as soon as possible.

You may need to save more aggressively to achieve a better retirement. Image source: Pug50, Flickr.

Selena Maranjian: How much should you save every year? My best answer to that is "more than you think."

Many people have the old "save 10% of your income" rule in mind as they save for retirement, but that's very often not enough. If your income is on the low side, for example, 10% of it may not be a hefty enough annual sum to be socking away if you want to be financially secure in your golden days. And if you received your I'd-better-start-saving-for-retirement! wake-up call a bit late in life, such as in your 40s, then you'll very likely need to sock away more than 10% in order to catch up to where you should be.

Regardless, it's best not to use the 10% rule blindly, as everyone's situation is different. Instead, take some time to estimate how much income you'll need in retirement. It will depend on your expectations for your life span, your health, your hobbies and plans, your local cost of living, and so on. Then, figure out how you'll achieve that income come retirement. Social Security will play a part, but its average annual benefit is only about $16,000.

An online calculator can help you estimate how big your nest egg can grow in different scenarios. I like to use this especially simple one. It's meant to calculate interest, but you can swap in your expected investment growth rate for the interest rate, and then try out different savings levels. For example, if you start with $0, sock away $6,000 per year, and expecting it to grow by 8% annually on average, over 25 years, you'll end up with nearly $475,000. If that doesn't seem like it will be enough, you'll need to save more aggressively. 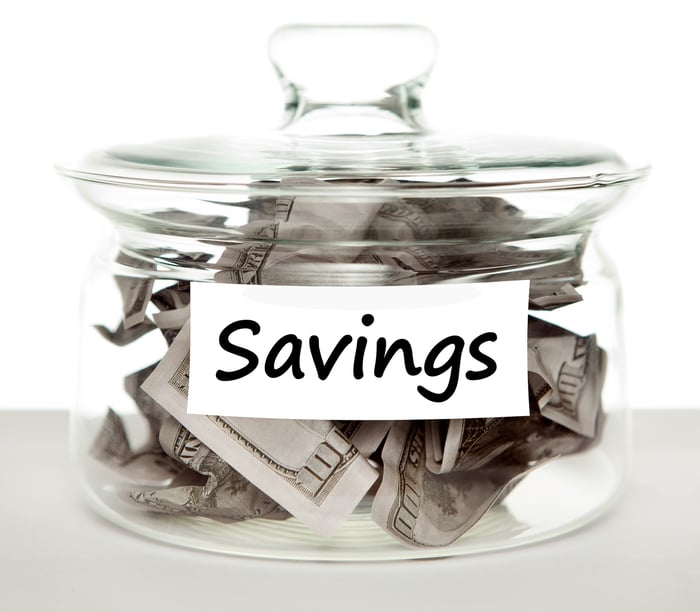 One way or another, get started saving. Imag source: TaxCredits.net.

Dan Caplinger: The key to saving is getting started. Whatever you start out saving, it's far easier to add to it later than it is if you just procrastinate and never start saving in the first place.

One great strategy to build savings over time is to start small but to make regular boosts to the amount you save. Many people take advantage of pay increases at the beginning of the year to channel more money to savings. If you save every penny of your higher pay, you won't notice the difference in your standard of living, because you'll still have the exact same amount of take-home pay in your paycheck. Yet by diverting money toward a 401(k), IRA, or other savings vehicle, the higher amount will accelerate the pace at which your retirement nest egg grows.

Another benefit of this strategy is that if an unexpected personal financial crisis hits, you'll be in a better position to weather the storm. Getting used to living below your means makes it far easier when your means suddenly get cut.

As Selena points out, even modest savings over time can add up to hundreds of thousands of dollars. Get started with whatever amount you can afford, but commit to increasing that in the future as your finances allow. That'll get you started on the right foot to savings success.