Please ensure Javascript is enabled for purposes of website accessibility
Log In Help Join The Motley Fool
Free Article Join Over 1 Million Premium Members And Get More In-Depth Stock Guidance and Research
By Brian Stoffel - Apr 11, 2016 at 7:02AM

Two broad categories will increase, while two others will fall precipitously.

You'll be spending more time with loved ones, and less money. .

Lots of people fret about whether they'll have enough money to live comfortably in retirement. While some real shortfalls do exist, we normally completely ignore our ability to adapt to our financial situations and find happiness at any spending level.

We also aren't too good at predicting how our spending will change as we age -- by choice or not. Such was the topic for a recent report released by the Bureau of Labor Statistics (BLS). In the end, there were three big conclusions that were reached. Find out what they were -- and how to use the information in your own life, below...

Housing remains paramount
Among households of all ages, housing is the largest expense, taking up, on average, one-third of expenses. The BLS paper studied households in three sections, those approaching retirement (age 55-64), those transitioning into retirement (65-74), and those well into retirement (75+). 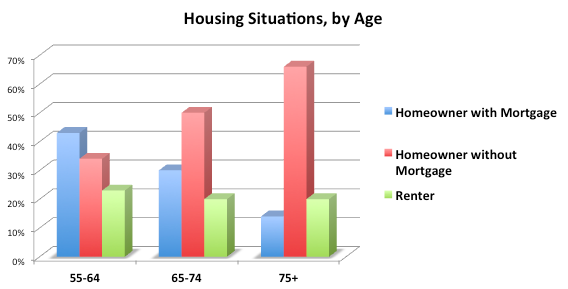 The vast majority have paid off their houses by the time they reach 75. But paying for upkeep and taxes still eats up the same amount of the household's income:

The answer is that while spending on housing decreases, overall income decreases at an even greater clip. When adults are in their late 50s, they are, on average, just coming off their peak earning years. Once they enter retirement, many don't have the means -- or, perhaps, the desire -- to spend sums equal to their prior income.

The takeaway is simple: Just because you're done paying off your house doesn't mean your housing expenses will disappear. Houses are manufactured goods that require a lot of upkeep. As you get older, you'll probably have to hire out help to do the more strenuous tasks you would normally do yourself. Don't neglect these expenses in your retirement planning.

Spending in two major areas will fall dramatically
Many people think of retirement as a time to take the worldwide vacations they never had the time to enjoy while they were working. That might lead one to assume that costs for transportation will skyrocket.

In reality, these trips might occur, but they're heavily front-loaded toward the first few years of retirement. And most people severely underestimate how much they'll save simply because they aren't forced to commute. It's a nice surprise for most retired folks!

For the average American household, spending on transportation -- combined with taxes due for Social Security and pensions -- account for a whopping 28% of all expenses. But these expenses drop precipitously once one transitions into retirement:

This is one of those topics that should make you smile. While there are several other categories (clothing, food, and so on) that also take dips as one transitions into retirement, none are quite so dramatic as these two.

For those on the cusp of retirement, remember to include these projections into your own calculations, as they might give you more breathing room that you once thought you had.

Medical expenses continue growing, but not as quickly as you might think
It's no secret that medical expenses -- especially long-term care for those who aren't insured for it -- can be very costly in retirement. In reality, while such expenses do tend to increase somewhat, it's not the absolute increase that causes the real problems; it's that the expenses stay the same while one's income shrinks, progressively taking a bigger piece of a household's pie.

There are multiple takeaways we can get from this. First, as I mentioned, it's important to consider long-term care insurance. Second, for every healthy habit you establish now (quit smoking, exercise regularly, and so on), the less likely you are to incur crushing charges against you. And third, be sure that you factor in steadily rising expenses against what will probably be a smaller income base later in retirement.

Putting it all together
Though two of these three categories point toward relatively high costs while transitioning into retirement, the larger picture is still one of reduced costs. When we factor everyone and everything into our equations, spending drops 13% between our pre-retirees and our transitioning retirees. It drops an additional 25% from there once households are well into retirement (75-plus years old).

For those who are behind on retirement savings, that's cause for relief -- though not an excuse to slack off on your savings.