Please ensure Javascript is enabled for purposes of website accessibility
Log In Help Join The Motley Fool
Free Article Join Over 1 Million Premium Members And Get More In-Depth Stock Guidance and Research
By Brian Stoffel - Apr 25, 2016 at 7:02AM

It seems harmless until you realize the huge sums of money it costs you.

Retirement is a tricky subject to write about. On one hand, we Americans are woefully underprepared for our Golden Years compared to what "experts" say we need. On the other hand, the very idea of "retirement" -- and the associated decades of saving -- is an incredibly new idea for humans. We simply aren't wired for it.

It doesn't stop there: one person can live very happily on $25,000 per year, while another can't bear to think of spending under $1 million. You can see why one-size-fits-all advice is just about impossible to come by.

This article is no exception -- but recent studies have revealed a nugget of truth that everyone should consider.

The effect of "leakages"
No, we aren't talking about a broken septic tank, which might actually be worse. Instead, we're talking about a phenomenon that can occur when you decide to raid either your 401(k) or Individual Retirement Account for any reason that's not directly related to providing income in retirement.

Generally, there are three ways that retirement account leakage can happen:

When you're young and retirement seems like a distant dream, deciding to pursue any one of these three strategies seems benign. According to the study, in any given year, the nation's 401(k) and IRA plans suffer leakage equivalent to about 1.5% of all assets.

In truth, however, the effects can boggle the mind. Because a 30-year old worker still has over three decades of work before retiring, that's three decades of compounding growth that they miss out on completely.

What happens to your 401(k)?
Using data provided by both Vanguard and the Census Bureau's Survey of Income and Program Participation (SIPP), researchers at Boston College's Center for Retirement Research were able to offer solid numbers to chew on -- and they are surprising, to say the least.

The researchers made the following assumptions:

As you can see, the effects of time and compounding have a significant effect. 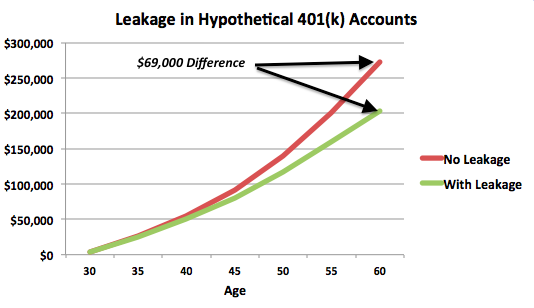 What happens to your IRA?
Because very few people actually hold the same job throughout their entire life, researchers also created a hypothetical situation using data from Vanguard and SIPP. All of the above remained the same, only this time:

Is it really this bad?
In reality, the average nest egg balance is far less than these assumptions project. That's in part because few Americans are as good at saving as the hypothetical person, and our example doesn't consider the effect of fees on our investments.

Whether or not these trade-offs -- getting money now in return for less money in the future -- are worth it is an entirely personal question based on your value system.

That being said, the takeaway is clear: If you raid your retirement account for $1 today, you're losing far more than that -- even after adjusting for inflation -- when you decide to retire.