Please ensure Javascript is enabled for purposes of website accessibility
Log In Help Join The Motley Fool
Free Article Join Over 1 Million Premium Members And Get More In-Depth Stock Guidance and Research
By Jeremy Bowman - May 6, 2016 at 11:21AM

These popular high-risk, high-growth plays may look tempting, but older investors would be better off avoiding them.

The rules of investing change as you get older. As your time horizon shortens, you should consider lower-risk stocks. For retirees especially, the game is no longer about growing ones portfolio, but rather about making it last. Because they no longer have a steady paycheck, retirees often look to dividend stocks to give them a regular income stream, and therefore, many tend to stack their portfolios with safe dividend-payers to get them through their golden years.

On that premise, the three high-profile stocks below might appear tempting, but are best avoided by retirees.

1. Netflix
Leading video-streamer Netflix (NFLX -0.98%) has been a rags-to-riches story twice in its history. After building a DVD-rental-by-mail empire, the stock crumbled in 2011 during its transition to streaming, losing more than 80% of its value. 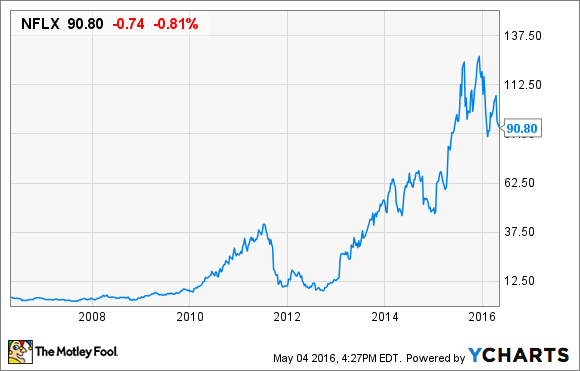 Over the subsequent years, Netflix gained that loss back and more. The stock was the best performer on the S&P 500 in 2015, climbing 134%, but it's also one of the most volatile equities. In its recent history, Netflix shares have moved an average of almost 12% after its quarterly reports, a wider swing than almost any other stock in the market.

Of course, there's no guarantee as to which direction the stock will move when it swings. The problem is that Netflix has been notoriously hard for Wall Street analysts to predict. Subscriber additions, its mostly closely watched metric, often vary widely from the company's own forecasts. Moreover, because Netflix has almost no profits today, its future earnings are especially difficult to predict.

Its most recent quarterly report illustrates this point. Netflix actually beat its own guidance, adding 6.74 million total subscribers, but its forecast for the current quarter was weak, which sent the stock down 13%. Was the underwhelming forecast a sign of things to come, or just a blip? No one knows for sure. The only thing that's certain about Netflix is that its volatility will continue. That makes it a bad bet for safety-minded retirees.

2. Amazon.com
Like Netflix, Amazon.com (AMZN 0.73%) has been a big winner on the market, returning gains many times over to early investors. The stock has also been on a roll lately; it was the second-best performer in the S&P 500 last year, behind Netflix, and it's trading near its all-time high after a blowout earnings report.

Like Netflix, however, the stock is especially volatile and lacks significant profits to underpin its value. The stock has moved by 10% or more following four of its last five earnings reports, and while it hasn't had a Netflix-like collapse since the dot-com bust, the stock quickly lost 30% of its value at the beginning of the year amid a market sell-off and a weak earnings report.

Though the company is now showing signs of profitability, CEO Jeff Bezos has repeatedly stressed his emphasis on the long term, meaning there's no telling when profits might shrink as the company invests in the next big thing. He pulled just such a move a few years ago, as the chart shows below. 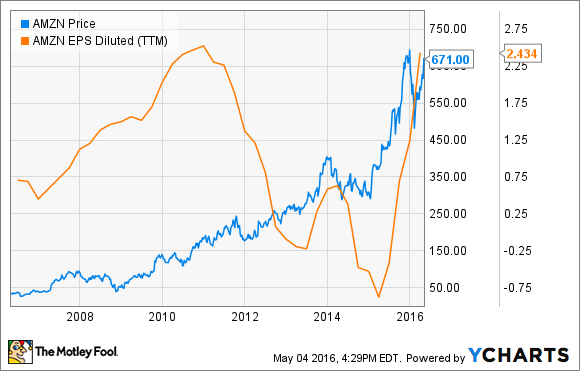 Even growth in its juggernaut Amazon Web Services division is decelerating, and its operating margin compressed last quarter. While Amazon may appear stronger than ever, plenty of risks remain for investors.

3. Tesla Motors
Tesla (TSLA -0.57%) bears plenty in common with the names above. The disruptive electric-car maker broke through in 2013 when it reported its first quarterly profit ever on the strength of its Model S. The stock gained more than 400% that year, but has been relatively range-bound since, and still sits 20% below the all-time high it set in 2014. 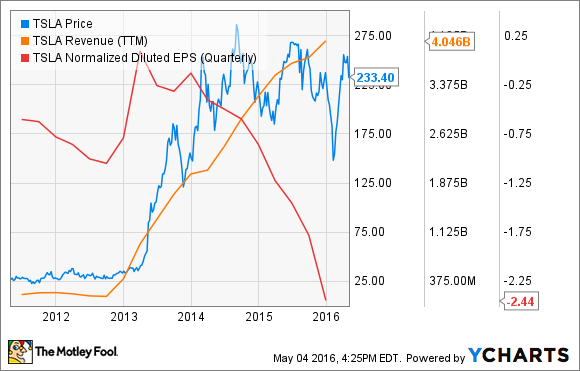 Like Amazon and Netflix, Tesla is notoriously unpredictable. The stock has moved an average of 7% following its last eight earnings reports, showing that the market simply doesn't know what to expect from the upstart automaker. Both the electric car market and the speculative self-driving car market are wide open at this point, and conditions could change dramatically over the next 10 years. There's no telling whether a company like Google, Uber, and or a traditional automaker might upend Tesla's future.

While demand for Tesla's vehicles continues to be strong, production constraints have undermined the company's ability to deliver. Its valuation rivals that of traditional automakers, but with a pile of operating losses and far fewer vehicle sales to show for itself, its stock remains one of the riskiest on the market.

All three of these stocks are market favorites, and could produce blockbuster returns for investors. But their high valuations, low profits, and uncertain futures make them too risky for investors in need of safety. Furthermore, none pays a dividend, and they won't for the foreseeable future. You might argue that they have disrupted their respective industries, and built competitive advantages that make them solid bets, but their valuations still put them at greater risk for black swan events that could send their stocks plummeting. Just look at Chipotle Mexican Grill, a once high-flying stock that has fallen nearly 50% since its peak last year, after foodborne illness outbreaks led to a sharp sales drop.

These stocks' propensities for sharp post-earnings falls might also prompt hasty and ill-timed selling by conservative investors, or fruitless worrying if they hold on through the volatile periods. Better off avoiding them altogether and sticking with safer dividend plays.