Please ensure Javascript is enabled for purposes of website accessibility
Log In Help Join The Motley Fool
Free Article Join Over 1 Million Premium Members And Get More In-Depth Stock Guidance and Research
By Brian Stoffel - May 23, 2016 at 7:05AM

We're a pretty happy lot in retirement...regardless of our nest egg.

Merrill Lynch and Age Wave have combined forces over the past five years to produce some truly interesting research. The most recent was a study titled "Leisure in Retirement: Beyond the Bucket List."

What was found flies in the face of what "experts" say: that most of us are doomed to a poor and miserable retirement. Consider some of the headlines that have popped up here at The Motley Fool regarding this stark reality:

I'm not immune to this: the third piece was written by me! And here's the real kicker: none of these articles used shady statistics, innuendo, or anecdotal evidence to prove its points. Compared to where we should ideally be -- able to replace a certain portion of our income in retirement -- we Americans are coming up woefully short.

So what's the truth about retirement happiness?

While you can read the entire study yourself, I can sum it up with the following five graphics.

First, let's look at the general level of emotional well-being for survey respondents as they age. 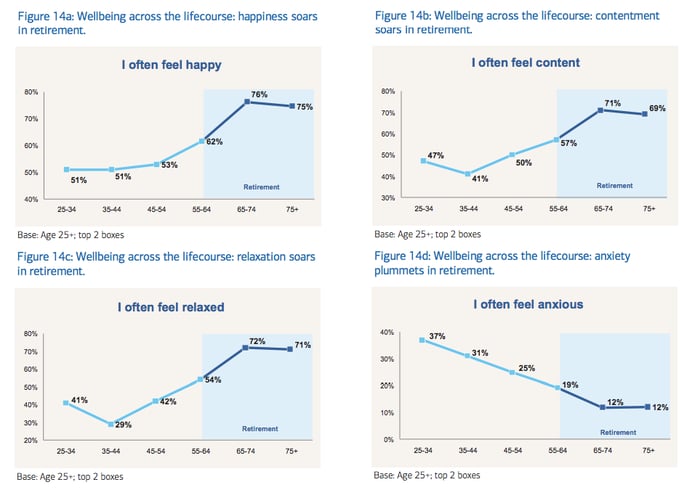 Between the ages of 40 and 70, the number of people in your age group who are happy will increase by 49%, contented people will grow by 73%, the number feeling relaxed will more than double, and the number experiencing anxiety will fall by more than 60%.

How could this possibly be?

The authors argue that one of the biggest factors is the freedom of time that individuals realize after leaving the workforce. And as you can see, this freedom isn't limited to the wealthy classes. 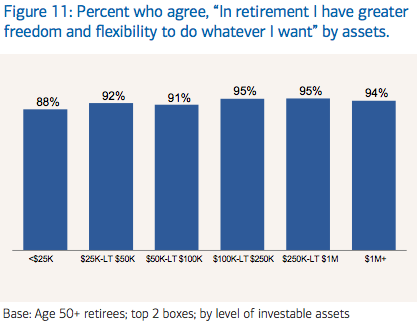 It's worth noting, too, that the study accounted for more than just "investable assets": the sample was "nationally representative of age, gender, ethnicity, income, and geography."

So why is there such a disconnect between what experts like myself are predicting -- and what living, breathing retirees are experiencing?

In a word, it's all about adaptation.

Putting numbers down on a sheet to determine what we "need" in retirement -- like what our "retirement number" is -- is reassuring. It is a concrete figure that we can point to and say, "We'll be OK when we reach that point."

A human being's ability to adapt to circumstances, on the other hand, is much more difficult to encapsulate in a sound bite or 800-word article. But the fact of the matter is that we can get used to just about any level of physical comfort, given that our basic needs are met.

It is how we use our time that plays the biggest role in our level of contentedness. As one survey respondent put it:

Do finances matter at all?

Given this information, this is a question worth asking. For their part, the study's authors noted that only 7% of respondents said that their retirement years were less enjoyable. But when they asked this subset why they were unhappy, the overwhelming majority (65%) cited financial concerns.

Beyond that, the real question worth considering is why we wait so long to call it quits. It seems backwards to work tirelessly for 40 years to keep up with the Joneses only to discover -- in our waning years -- that the real key to happy living lies in figuring out what your own level of "enough" is, and leveraging that to give you the time to pursue what really matters.

Of course, the fact that Social Security doesn't kick in until 62 likely plays a role. But maybe we should all consider what award-winning Motley Fool columnist Morgan Housel pointed out at the end of a 2014 article:

"[You] can gain more control over [y]our time by...keeping your expectations in check and not trying to keep up with your neighbor."  He concludes, "[M]ost of us can probably retire -- or gain enough financial independence to work in a job we love -- far sooner than you realize."