Please ensure Javascript is enabled for purposes of website accessibility
Log In Help Join The Motley Fool
Free Article Join Over 1 Million Premium Members And Get More In-Depth Stock Guidance and Research
By Selena Maranjian - May 30, 2016 at 8:40AM

How much of your nest egg can you withdraw each year in order to make your money last for the rest of your life? One of the most common answers to that question is 4%. It might be best to forget the 4% retirement rule, though, since there are better ways to approach your savings. 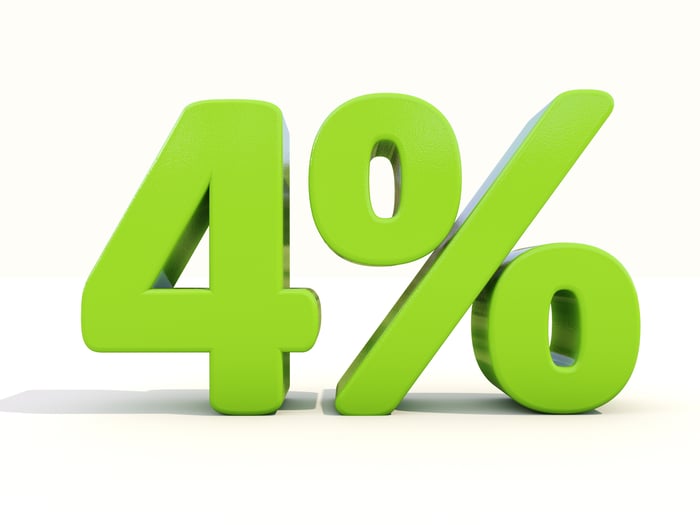 Many of us spend a lot of years amassing a war chest of money for retirement. As we approach retirement, though, an important question surfaces: How much of your nest egg can you withdraw each year in order to make your money last for the rest of your life? One of the most common answers to that question is 4%. It might be best to forget the 4% retirement rule, though, since there's a better way to approach your savings.

Let's back up a bit and explain just what the 4% rule is. It was introduced by financial advisor Bill Bengen in 1994 and was made famous in a study by several professors at Trinity University a few years later. The rule says you can withdraw 4% of your nest egg in your first year of retirement and then adjust future withdrawals for inflation. This withdrawal strategy assumes a portfolio of 60% in stocks and 40% in bonds, and it's designed to make your money last through 30 years of retirement.

Why the 4% rule is problematic

That's all fine, but there are several reasons you should think twice before subscribing to the 4% rule. For starters, you might want to have a different asset allocation than various 4%-rule models employ, such as the 60-40 split. If you have, say, 75% of your portfolio in stocks, the rule doesn't apply to that.

History is a factor, too, because the rule was created more than 20 years ago, when interest rates were higher. That meant the fixed-income portion of people's portfolios isn't producing as much income as it used to, and it will be less able to replenish funds withdrawn each year.

Then there are life spans, which have been getting longer. The 4% rule aims to make your money last for 30 years, but if you retire at 62 and live to 96, you might be quite pinched in your last years.

Next, each of us has different financial situations and needs, and every year or set of years in the stock market is different, too. If you plan to follow the rule and withdraw 4% of your nest egg in your first year of retirement, what if the stock market and your portfolio tank by 30% in the year leading up to your retirement? Such things can happen -- the S&P 500 sank by 37% in 2008. If that happens early in your retirement, you'll either be withdrawing far less than you'd planned on, or you'll be depleting your nest egg faster.

So, what should you do if the 4% rule is ruled out? Well, you might still use it as a rough guide. Some suggest letting the stock market's performance influence your withdrawals, so that after a strong year, you might withdraw a bit more, and after a bad year, take out less.

You might also, or instead, plan to just be more conservative, turning it into a 3% rule. Your money is likely to last longer that way. Don't be rigid about it, though. If you're withdrawing 3% annually and the stock market does well for a bunch of years, goring your portfolio significantly, you might revisit your withdrawals and adjust them upward. As you move through your retirement, you might also reassess everything from time to time. If you're 85 and don't think you'll be around in a decade, do you have more than enough to live off of for those years? If so, you might withdraw and spend more, or plan to leave more to loved ones.

Of course, as you get older, there's a good chance your interest in and/or ability to manage your money might fade. That can make fixed annuities worth considering. (Avoid variable or indexed annuities and focus on ones promising a fixed payout.) You can spend a big chunk of your nest egg on one or more, and they can pay you regularly for the rest of your life, taking a lot of worry and work out of your financial life. Consider consulting a financial planner, too -- ideally a fee-only one, not one who benefits from commissions by selling you products.

The 4% rule can be OK as a general rule of thumb, but follow it rigidly and unquestioningly, and you might run into trouble.