In America, 66 is the age at which retirees can receive full Social Security benefits. These folks have been paying Social Security taxes their entire working life -- so we might assume that they've got a powerful motivation to get their just dues from the program.

But that's a naïve approach, according to a 2014 report from the Government Accountability Office (GAO). The GAO's survey found that 43% of retirees claim benefits as soon as they can at age 62, while 65% have claimed before reaching full retirement age. There are crucial variables that influence when a person decides to start receiving Social Security benefits -- some more powerful than others.

Before diving into those reasons, it's worth pointing out how the age at which you decide to get Social Security benefits impacts your monthly check. Let's say that you are due to receive $1,000 per month at full retirement age. Here's how that monthly check would change, assuming you start to receive benefits on the following birthdays. 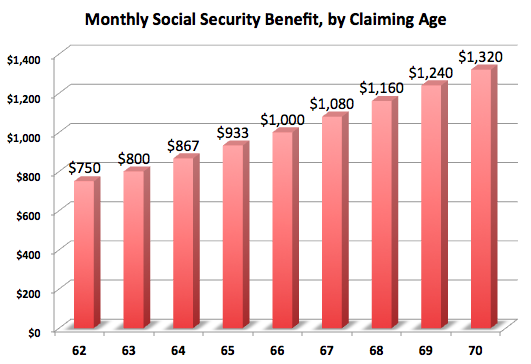 While there are some Social Security loopholes that have closed between when the GAO survey was performed and today, those loopholes were not commonly utilized, and likely played a negligible role in the results.

The strongest factor in claiming Social Security early: the type of job you have

There were several factors that the GAO found to play a role in claiming benefits early. None, however, was more salient than the type of work one did from the ages of 60 to 62 -- or directly before becoming eligible for Social Security.

If an individual was employed in a blue-collar job, they were 55% more likely to claim benefits before the age of 66. It shouldn't take too much thinking to figure this one out: as we age, we become less able to undertake the strenuous physical activity required of many blue-collar jobs. 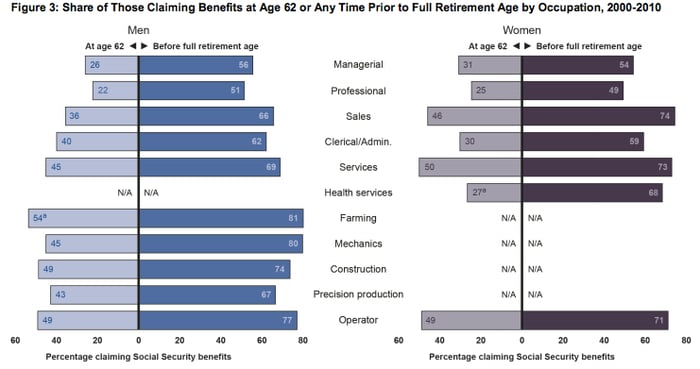 Over 70% of those who worked in farming, mechanics, construction, and as an operator called it quits before reaching full retirement age. Whether man or woman, however, those with professional white-collar jobs only took benefits early half of the time -- a significant difference.

The takeaway is clear: the type of work you do -- physical vs. mental -- plays a large role in determining when you take Social Security benefits.

The other major factor influencing a decision to claim early: employment status

Beyond the type of work one does, whether or not one has a job between the ages of 60 and 62 is the other major factor. The GAO found that if someone was employed full-time between at these ages, they were 30% less likely to claim benefits early.

Quite simply, people need to make ends meet -- regardless of the long-term Social Security consequences. The GAO report noted that, "many unemployed older workers struggle to find new jobs and may face unique reemployment challenges, such as employer reluctance to hire older workers or out-of-date skills." Claiming Social Security is simply a way of ensuring that the bills get paid.

Oddly enough, the GAO also found those who worked at least 35 years (the number of earning-years Social Security uses in determining monthly benefits) were 38% more likely to claim before the age of 66. I see two ways of looking at this interesting data point: (1) blue-collar workers are more likely to have started working earlier (as they didn't put off work for college) and therefore skewed the results, or (2) those who have worked this many years have earned enough cash that they can afford to retire early and take a reduced payout.

Either way, the bigger picture remains clear: one's financial situation -- heavily influenced by whether or not they are employed -- plays a big role in deciding to claim benefits early.

At the end of the day, every situation is unique. Be sure to spend time coordinating with your spouse and a certified financial planner to help figure out how you can best make Social Security work for YOU.