You've no doubt heard a lot of bad news about Americans and our ability to save for retirement. To be sure, there's a lot of truth to those headlines. But I'm an eternal optimist, and when we look back on 2016, we'll see that there have been significant -- and positive -- changes in the level of retirement savings among all Americans.

Every year, the Employee Benefit Research Institute conducts its Retirement Confidence Survey. As you can see below, the trends show marked improvement over the last three years in terms of the nest eggs current workers have built up. 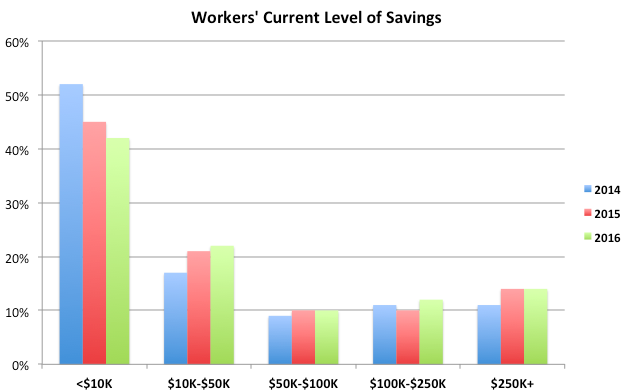 Data source: EBRI. Figures do not include value of primary residence or defined benefit plans.

It's important to remember that this information covers all workers -- from those in their late 50s to those who are fresh out of college. When you consider how broad that is, it becomes less troublesome to see that such a large proportion of workers have less than $50,000 saved up.

It's also important to point out that the value of one's primary residence, any defined benefit plan (i.e., a pension), and the contributions that will eventually come from Social Security are not included in this figure.

Obviously, in the most perfect of worlds, everyone would have a nest egg built up to help them live comfortably in retirement. But things like this don't change overnight. And it's heartening to see the proportion of workers with less than $10,000 saved up shrink from 52% to 42% in just two years. To put that in perspective, that means roughly 12.4 million U.S. workers moved out of the bottom category. That's a pretty big deal.

But retirees are making positive changes as well

Lest you think only workers have seen their nest eggs improve, the same trends hold true for current retirees -- albeit to a lesser degree. 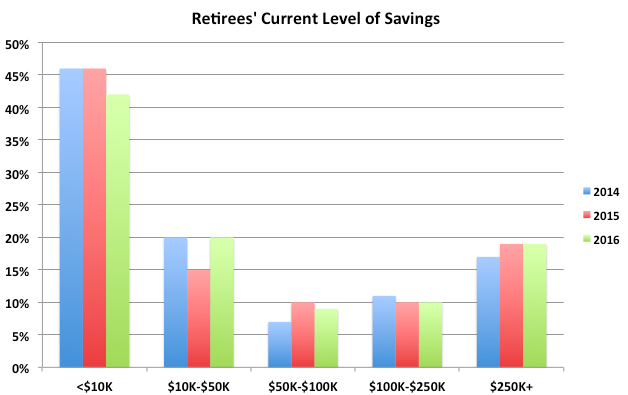 Data source: EBRI. Figures do not include value of primary residence or defined benefit plans.

The key moves here are on the two ends of the spectrum. While there are no hard-and-fast figures on the total number of retirees in America -- in part because defining "retirement" can be difficult -- the Social Security Administration estimates that there are roughly 44 million retired workers and dependents collecting Social Security.

Again, these are muted numbers when compared to retirement savings among workers, but they are positive nonetheless.

No matter your age, it's important to start saving for retirement right now. While the size of your nest egg is highly unlikely to add happiness to your life in retirement, not having to worry about making ends meet does free up time and attention to focus on the things that matter most to you. In the end, that's what this whole exercise is really all about.