Most people start taking IRA distributions when they retire, but many don't know how much they have to take. Find out here.

Your best strategy for IRAs is to leave them untouched during your working years to let them grow, only taking money out after you retire. Many retirees take that a step further, choosing not to take IRA distributions until they absolutely have to. But the IRS established rules that force you to withdraw money from your retirement accounts, and so knowing the ins and outs of the IRA distribution table will help you make sure you avoid some nasty penalties. Let's take a closer look.

The other situation in which you'll have to use an IRA distribution table is if you inherit an IRA. Except for spouses, who are allowed to roll over inherited IRAs into a retirement account of their own, RMD rules apply to beneficiaries of all ages, and there's a different table that applies to inherited IRAs that you can find here on the IRS website.

There are special rules that apply to minimum distributions for those who are married and have a spouse who is more than 10 years younger than they are. If that spouse is the only beneficiary of your IRA, then you're allowed to use a different set of tables that take into account your joint life expectancies. You'll find the tables that apply in this situation at the same link on the IRS website as the inherited IRA distribution table.

If you forget to take your distribution, there's a huge penalty that the IRS imposes. The penalty amount is 50% of what you should have withdrawn. That's typically a big enough incentive to get people to use the IRA distribution table and take their RMDs on time.

Later on, though, the percentages get big enough that you're virtually required to start liquidating assets, as you won't be able to generate the 5% to 10% of income that you'll need when you reach your 80s and 90s. As a result, it's important to plan your investments according to make sure that selling those investments won't cause problems down the road.

Be smart about your IRA
Having to use the IRA distribution table might be intimidating, especially as the penalties are so high if you get it wrong. But by being smart about taking required minimum distributions, you can put yourself in the best position to make maximum use of your retirement accounts when you need them most. 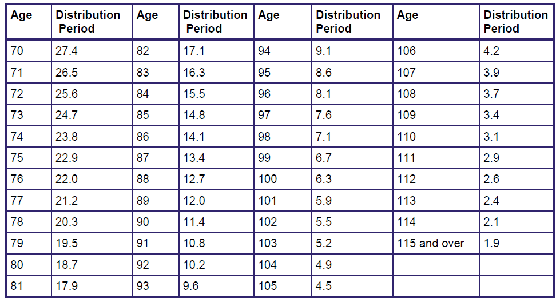