Gathering enough cash for a down payment on a house can be a daunting task. If you haven't saved for at least a couple years, you could have trouble qualifying for a mortgage. And even if you do, the interest rates can be prohibitive.

Luckily, there's a loophole in how IRAs are structured that can relieve some of this pressure. Indeed, if you are pulling money out of a Roth IRA, you can likely do so and pay no tax at all. And while you'd still owe taxes on an early Traditional IRA withdrawal, you can avoid the 10% penalty.

Read on for details. 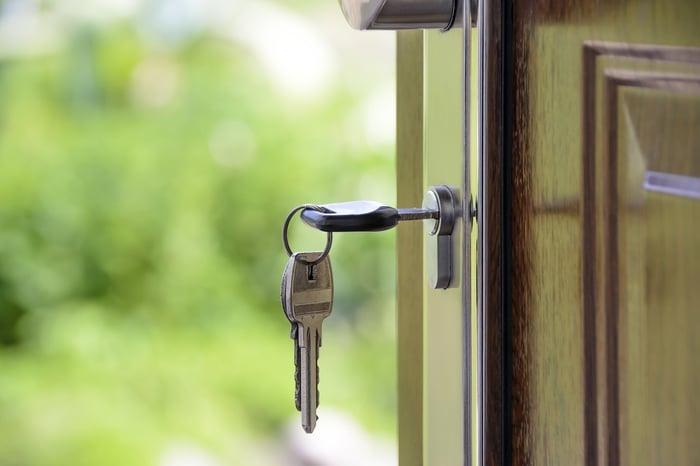 Using retirement money for a house? Isn't that a bad idea?

As far as home buying is concerned, I am what you might consider a Perma-Bear here at The Motley Fool. The folks at Zillow have even taken note. While I understand the benefits of owning rental property, when it comes to buying a house for yourself, I considered it one of the most over-rated financial moves ever.

That's because we don't really understand that we don't own equity in the house, the bank does. We aren't really paying principal at the beginning; we're paying interest (aka "rent"). And the down payment isn't a great investment; it often trails the S&P 500 by an order of magnitude.

All of this leads to today's reality: I am a homeowner! Upon starting a family and wanting stability for our daughter, my wife and I took the plunge -- albeit a decade later than most of our friends. But we didn't do it for financial reasons; rather, it was for social and emotional ones.

Because we weren't interested in buying a home, we didn't save up for a down payment. And yet, because of a loophole in IRAs, we had no problem making the payment.

There are two ways that you can use money socked away in a Roth for a home purchase.

The good news is that you'll likely owe absolutely no taxes. That's because before putting your money into a Roth, you already paid taxes on the cash you earned.

The first provision is if you classify your withdrawal as related to a first-time home purchase. All of the money you pull out is tax-free, if:

But Roths also allow for early withdrawals that aren't designated as being for a home as well. Because you have already paid taxes on the money you put in, you can withdraw it tax-free. But there is an important caveat: you can only withdraw the principal.

That opens up another loophole: if you need more than $10,000 for your down payment, you can combine both of these strategies: taking out $10,000 from the account and calling that part of your gains, and taking out an amount equal to or less than the principal you put in.

This is how we paid for our down payment. And because we've been avid savers and frugal spenders, our retirement accounts are still plenty healthy.

If you don't have a Roth, or don't have enough in one, you can also use a loophole to let you take money out of your Traditional IRA without paying a penalty. That's because the Traditional IRA also allows for the same $10,000 withdrawals for the first-time purchase of a home.

But there's a big catch here: you didn't pay taxes on that money when you put it in, so you'll likely owe Uncle Sam a pretty penny. Making matters worse, because these withdrawals tend to be rather large, they can significantly increase your tax burden, depending on your bracket.

That's why, all things being equal, a Roth is a much better vehicle to use.

Skeptics have a point, but remember what money is for in the first place

Some might think it (small f) foolish to pull money out of a retirement account for a down payment. Often times, I count myself among those skeptics. That's because once you pull money out of a Roth or Traditional IRA, you're not only losing that money from your retirement account, but all of the tax-advantaged growth that goes along with it. The younger you are, the more you're losing.

Here's our example: my wife and I pulled out a combined $25,000. But when retirement time hits in 30 years, we'll be missing much more than $25,000 -- it will be more like a $250,000 hit. That's because we're missing out on 30 years of tax-advantaged growth of about 8% per year, depending on how you want to extrapolate historical returns.

But we need to remember what our overarching goals are for money -- and those are different for everyone. We want our daughter to grow up in a safe, stable, and diverse community. And extra $250,000 in our coffers at retirement time isn't going to do that.,

That's why it's important to remember that money should be used as a tool to help you enjoy the life you want to live. If owning a home -- for financial, social, emotional, health, etc. reasons -- is what you desire, and you understand the long-term trade-offs of lost growth from your retirement accounts, then it's a smart move to make.

Did You Know About This IRA Housing Loophole? @themotleyfool #stocks $ZG $Z Next Article
Current